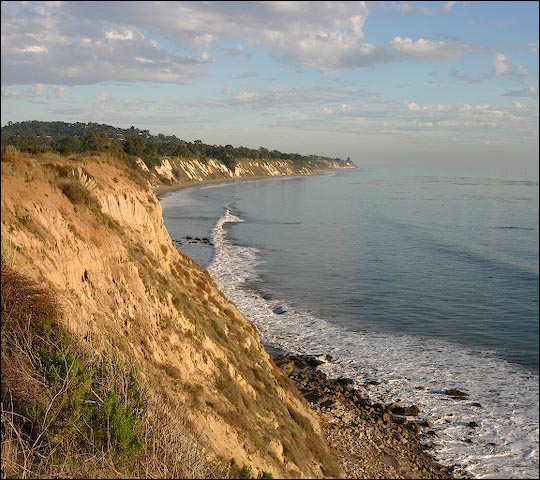 Many different raptor species have been observed on More Mesa in the past few weeks.  These include:

As evidenced by sightings of a female Northern Harrier Hawk, winter residents are also coming back.  A female Harrier has been seen in the northeast corner of More Mesa hunting in its distinctive “terrain following” mode. Harriers can also be identified by the characteristic white spot on their rump; a feature that appears to “flash” when the bird is turning in flight. The raptors listed above are, of course, in addition to our ever present and very beautiful, White-tailed Kites.  Kites have been observed hunting and perching regularly at East and often at West and Central as well.

We are very grateful to avid birders who have been using the “Sightings Report” feature of this web site at  Contact>Sightings Report to report what is happening with respect to the birds and animals on More Mesa.  We encourage all of you who see any raptors or other unusual birds and animals to report them.  To access the “Sightings” form from the Home Page, click on “Animals” and then “Sightings” at the left hand side of the page.  The “Sightings” feature is easy to use and helps document the activities of the fauna of More Mesa. 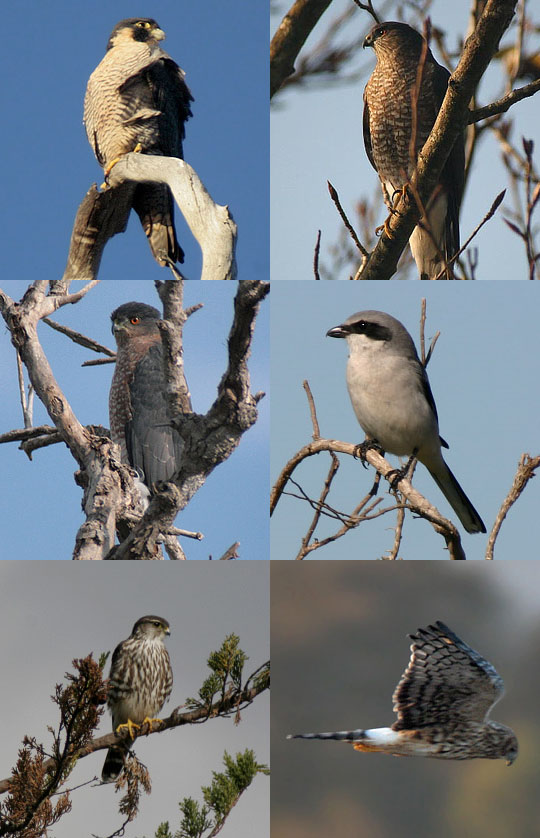 Raptors from left to right: Peregrine Falcon, Sharp-shinned Hawk, Cooper’s Hawk, Loggerhead Shrike, Merlin, Northern Harrier (all except for the Falcon were photographed on More Mesa).

The image above is of a Golden Eagle taken by Callie Bowdish at Cachuma Lake.

A note from the Board …

Many of you may remember the Goleta Vision Committee that met throughout the year 2006.  The efforts of that committee resulted in a well received document titled “A Comprehensive Vision for the Eastern Goleta Valley (GVC 20/20)”.  This document may be viewed by clicking on GVC 20/20 at:

The visioning process, while not legally binding, was undertaken as a precursor to the formation of a GPAC (General Plan Advisory Committee); a committee to be tasked with the creation of an updated community plan for the unincorporated portion of the Second Supervisorial District.  The seven member GVPAC (Goleta Valley Plan Advisory Committee) has been formed, and held its first meeting on 1 October 2008.  The near-term list of twice monthly meetings to be held in conjunction with the work of this committee, and the timeline for producing the updated plan may also be found at the address above.

I am very honored to have been selected to be a part of this committee.  Speaking as a member of the Board of the More Mesa Preservation Coalition (MMPC), I believe that environmental and open space issues are major considerations for our area. Consequently, these topics should become a significant part of the Community Plan.

In keeping with this belief, MMPC is, once again, soliciting comments from our supporters, as well as other members of the community, on topics such as open space, wetlands, vernal pools, habitats, creeks, watersheds, parks, trails and visual and aesthetic resources. This is your chance to get your views included in the long range plan for your community!  Voice your opinions by contacting us via the Contact page. Your comments will be forwarded to the committee and integrated into its discussions.

We live in a truly beautiful place.  Thanks so much for caring about it.

This month we are pleased to present a new feature of our web site …  “Friends of More Mesa”; articles highlighting members of our community who have consistently shown a high level of commitment to the preservation of More Mesa.  Although we are launching Friends of More Mesa in this September 2008 Monthly News, the “Friends” feature ordinarily will be found at People > Friends.

We are very pleased to present the first of our many valued friends … Mark Moseley.

No newcomer to our lovely South Coast, Mark Moseley was born and raised in Santa Barbara.  And, like most of our residents, Mark considers himself very fortunate to call Santa Barbara home.  And also, like many who value the unique and beautiful place we call home, Mark has found ways to give back to his community in both personal, and professional, arenas.  As a respected local realtor, Mark assists his clients with extensive knowledge of the area’s neighborhoods.  And as a resident, a family man, a member of the PTA, and an American Youth Soccer Organization (AYSO) coach and referee, Mark finds avenues for supporting and improving schools and his community in general.  Mark, his wife Cathy, and their three children, currently reside near More Mesa and frequently enjoy the scenic and recreational opportunities it offers. 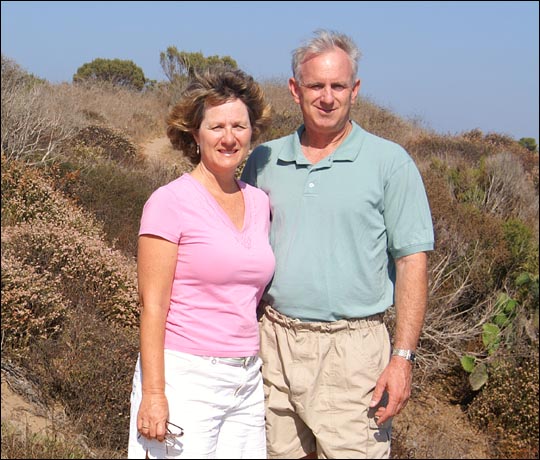 Mark and Cathy Moseley
Over the past four years, Mark Moseley has proved to be a most kind and generous supporter of More Mesa and its treasures.  Following his unique practice of donating to local non-profits on behalf of his real estate clients, he has made several important contributions to the More Mesa Preservation Coalition.  We are grateful to Mark and his family for their generosity, and for caring so much about this most special place.

In many of our communications to More Mesa Preservation Coalition supporters, we have emphasized the importance of building a very large and powerful supporter base.  MMPC  stresses this point over and over, because, at this stage of our efforts to preserve More Mesa , it is crucial that all the people who care deeply about More Mesa be aware of everything that is happening in, around, and about this very special place. From the few community residents who chose to be supporters of MMPC in 2000, we have increased to more than 850 strong.  The graphic below shows the robust and steady growth we have witnessed in the intervening years.

However, it is now more important than ever to expand this supporter base to twice, or three times, its current number.  Should the status of any aspect of More Mesa change, at any time, we want all of the community to know about it … and know about it quickly.  We want to be agile and able to respond to any issue effectively and promptly. Toward this end, we hope to accelerate the growth of our supporter base in the coming months.  You can help by talking about More Mesa to your family, friends, neighbors and colleagues.  Urge them to be included on the MMPC list, by contacting us.  Almost all of our communication is done via e-mail, so we ask that supporters supply an e-mail address, and at least one other form of contact (mailing address and/or phone) so that we easily relocate supporters who change servers.  Please know that all contact information is held in the strictest of confidence and will not be supplied to any other person or organization … ever.

Thanks for all your help.