Night Walk on More Mesa: Continuing with our “Walk on More Mesa” theme, a very different kind of walk presented itself in late September. Jennifer Stroh of the Land Trust for Santa Barbara County invited me to an informal walk that was not only on the west side of More Mesa, but it was a night walk as well!  Since I had never experienced a night walk that focused on nocturnal animals, I was eager to participate.

Our leader was Ted Mullen, a Senior Biologist, graduate of UCSB, and currently a scientist with MRS Environmental, here in Santa Barbara. As soon as we headed out onto More Mesa, Ted launched our adventure with a lesson in listening … a key skill when there is little, or no, light; and especially important when one is trying to identify birds and animals that hunt at night. He talked about identifying all the various sounds (man made and otherwise) and then sorting them out from one another. And, although the man-made intrusions on More Mesa are somewhat limited, he pointed out two important ones: 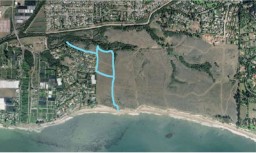 At the beginning of the walk, on the northwestern edge of More Mesa, we heard three species of Owls: Barn, Great Horned and Screech. Then Ted surprised some of us by noting that Screech Owls did not screech at all, and proved it by playing several of their calls. We were also treated to the sight of an owl flying quite close to us.

One of the “owl” stories Ted told, and one that I got a big chuckle out of, concerned Great Horned nest building. The Great Horned, being a bigger bird, hunts larger animals, like rabbits and skunks. Moreover, skunks are regularly on their menu because, unlike the rest of us, the Great Horned is not bothered, at all, with the stench of skunk spray. Ever-vigilant parents, the Great Horned will therefore sometimes line their nest with skunk carcasses. This clever strategy prevents predators from being tempted to carry off the chicks … because most of the rest of the world is definitely not fond of skunk spray!

As our walk progressed towards the coast, we saw and heard Spotted Bats and, at one point, we even heard a Towhee; a bird that should have been asleep. Maybe we woke it up … or something else woke it up?

The sky was brilliant and clear. Amateur astronomers had a blast and we even got to see all the lobster boats out on the first day of the season. It was an absolutely wonderful walk and I was privileged to be part of it.

How You Can Help

Our coalition very rarely solicits donations from our supporters, only in times of real need. While More Mesa is not in immediate jeopardy (no building plan has yet been submitted to planning), we spend additional funds to remain in a “ready state” for when the developers make their move.

That means continuing to build and maintain a database of supporters who can help us by contacting their elected officials, testifying at hearings, recruiting their friends, contacting the media and coming together for a show of community support. Lastly, we maintain a small contingency budget so that we can react quickly when the time arises.

Our immediate expenses for the next year are not large (unless things change with development plans), no more than $5,000. But without those funds to replenish our budget we could be flat-footed the day the development plan is filed.

I am sure that you support many other important causes; I just wanted to put in my request for the White-tailed Kites, the Great Horned Owls, the Red-tailed Hawks … and even the Spotted Bats of More Mesa. A gift of $50 or $100 to keep us in a ready state would be terrific.

Thank you so much, from all the critters of More Mesa.