Caves Are No More

In several previous issues we discussed the dangerous erosion of the cliffs of the various sections of More Mesa. In October of 2014,  an incident where someone was hurt while in a cave on the western side of More Mesa precipitated a discussion of the geology of More Mesa’s cliffs. Specifically, we noted that the east side consists of a very old formation that erodes slowly, while the west, a much younger formation, erodes very quickly. In fact, sea cliff retreat in the this younger formation has been demonstrated to be about 10 inches a year, the highest rate observed along this portion of the South Coast. What this all means is that the western cliff is steep, unstable and unpredictable. At the time we advised everyone to stay out of the caves since they too, were judged unstable, unpredictable and dangerous.

But now they are gone! These very same caves collapsed last week. County firefighters conducted a precautionary search and found no evidence of any victims being trapped during the collapse. Fire Captain Dave Zaniboni issued a warning that it is extremely dangerous now that the bluffs have caved in.

The Good News: Now that the caves have collapsed there is no longer any danger that people inside them will be injured or killed.

The Bad News: Once again, we remind everyone that the cliffs on the edge of More Mesa are UNSTABLE, UPREDICTABLE AND DANGEROUS. Please stay off the trails leading down from More Mesa and take extreme care when using the Coastal Trail. Please be safe! 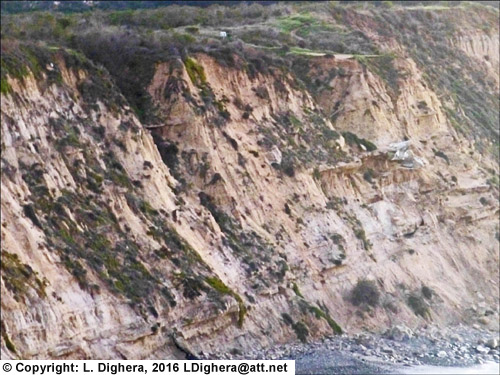