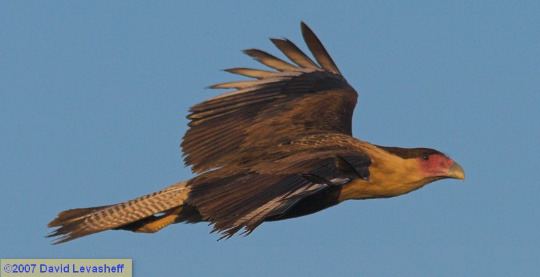 Friday February 2nd Jeff Hanson, Dung Ha and myself were on a noon time birding / photo walk on More Mesa.  We were 300-500 yards back from the bluffs on the trail that extends out from Puente Drive and the new construction area.  We had been admiring the White-tailed Kites and a Shrike, when Jeff informed us there was a Red-tailed Hawk in the cypress trees in the distance.  I took a look through my binoculars and stated I thought it was an Osprey, due the shape of its head and neck.  The bird then took flight to the east along the bluff.  I still thought it looked like an Osprey, though the coloring seemed wrong.  It veered around to fly west then north along the house line.  Dung had his camera up and shooting.  Jeff, in the mean time, had announced that the bird was a Golden Eagle, which he deduced from the white on the wings and tail.  The ‘Golden’ flew with purpose towards the foothills over Forte Ranch and beyond.

Later in the afternoon, I received an excited call from Jeff. “That wasn’t a Golden!” he proclaimed. “It was a Crested Caracara!” I immediately looked at the 150 pixel wide shots I had managed to take and was able to confirm Jeff’s call on the bird.  It was getting on towards four o’clock and I decided that it might be prudent to go take another look.

I arrived at the Patterson entrance to More Mesa before 4:30 and hurried out onto the trail.  I ran into a nice gentleman with binoculars, and he wished me good shooting.  I stated I was back to try to catch a Caracara.  He said he had seen the bird cruising the area, walking around, and in, the trees. After surveying the fields from a nearby high spot, I decided to head for the cypress trees at the western end of the bluffs.  As I approached, I could finely make out that the Caracara was lit in the trees.  The sun was getting low in the sky and behind a good bank of clouds … bad light.  I started shooting as I approached and the bird did not seem to mind my presence too much. It looked like the sun would clear below the clouds if I waited long enough.  During that time the Caracara left the tree twice to make a large loop back around to the same tree, much to my relief.  I would say I was able to get within 50 feet of its perch in the tree, enough to give me a full frame shot with my 20D, 300mm lens and 1.4 TC.  He would watch the joggers go by and looked at the couple loudly enjoying the sunset.  When the airplanes flew over he would cock his head to see, and as it passed, cock his head the other way to watch it go.  At one point I did get a good profile shot of him which showed him with a full crop, perhaps why he didn’t mind me too much.  A little after 5:00, I left him feeling I had invaded his space long enough. 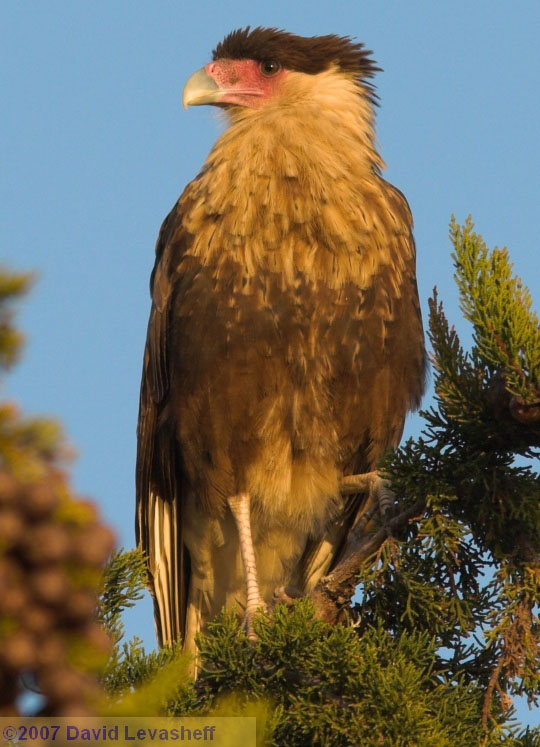 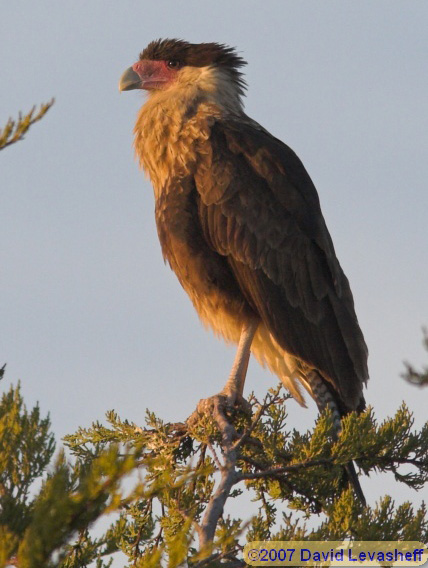