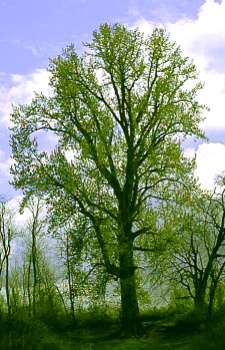 A Grove of Cottonwood is a Sight to Behold: Today’s treasure is native to the Western States, a member of the Willow family and closely related to Poplars and Aspen. It’s the Black Cottonwood. Deriving its name from a rough and dark colored bark, Black Cottonwood is one of the fastest growing trees in North America. During spring and summer, it will increase its height by up to 6 feet, a yearly growth spurt which allows Cottonwoods to routinely reach a height of 100 feet. And there is a need to hurry … since they are not a long-lived species and may survive only 70-100 years in conditions that are less than ideal.

However, the environment is obviously ideal for the United States National Champion Black Cottonwood; a tree that resides at Willamette Mission State Park in Oregon. This grand old tree stands 158 feet high, has a circumference of 27 feet and is estimated to be about 265 years old. (The photo on the right was taken when leaves were first making an appearance.)

The lovely Cottonwood is tough and easy to grow as long as it is in sun, has good drainage and is near a water source. And while water is extremely important for young trees, larger trees are more drought resistant. Black Cottonwood leaves are 2-6 inches long, light green and oval to heart-shaped, with a point on the end. The leaf itself is attached to a long “stem-like” structure called a petiole, with the other end of the petiole being attached to a woody stem of the tree. Attachment of the petiole to the leaf is an important part of the story of Cottonwoods and Aspen.

What’s the Story? If you are lucky enough, as I was during research for this Treasure Hunt, you may get to be with Cottonwoods when there is some wind. In a fashion similar to their Quaking Aspen relatives, the More Mesa Cottonwoods provided a serenade of shimmering, tinkling and soothing music that created a truly magical time.

Back in front of the computer I wanted to know why this magic happened. It turns out the magician is the petiole. Its end is shaped to allow the thin, flat leaves of the trees to turn in any direction with the slightest bit of breeze. (Think of this mechanism as if it were a hinge.) As leaves all turn in different directions in a flurry and flutter, the tinkling can be heard and felt. In spring it is a delightful whisper. In autumn the leaves that have now dried a little, and turned a brilliant yellow, provide more of a rattle; but one that soothes and comforts.

It’s Spring Again … Procreation Time: Cottonwoods are dioecious, meaning that there are male trees and female trees. Early in spring, even before we see new leaves on the tree, both male and female trees flower, with inconspicuous catkins from 1 ½ to 3 inches long; males red and females green. Males catkins fall from the tree fairly quickly, releasing windborne pollen to find the catkins of a female tree. Pollenated female catkins become a series of buds, then flowers and finally thousands of seeds with their famous attached cottony parachutes. These windborne seeds create the famous Spring-early Summer “snow storms” that give Cottonwoods their name and reputation. Alas, male trees do not provide any snowstorms.

In addition to propagating from seeds, Black Cottonwood most often reproduces itself, and sprouts roots, from both large stumps, as well as small cuttings. Not only do they root where they fall, but survive being dispersed by water, to establish a new Cottonwood far from the original tree. 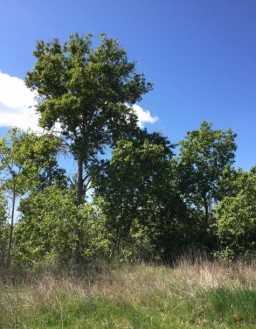 Cottonwood -The love-Hate Relationship: While fast growth and wonderful shade are reasons enough to cherish Cottonwood, these trees possess many other fine qualities. In the wild, Cottonwood is one of the fastest trees to colonize unplanted areas, making it a solid choice for regions prone to flooding and soil erosion. It is used to stabilize streambanks, acts as a natural waterway filtration system to reduce sedimentation and creates groves that become natural windbreaks.

At first glance the glorious, beautiful, colorful, unusual Cottonwood seems like a tree everyone would love; specially when we think about the wonderful “snowfall” that the cottony seed carriers create. But a friend who lived in Alaska offered the opinion that “They had quite enough snowfalls in the winter and definitely did not need another one in the summer!” The snowfall sounds wonderful in principle, but can be frustrating and annoying to clean up and take out of clogged drains. It is especially frustrating when it gets wet and turns into an icky mess.

Bottom line: Cottonwood makes a stunning tree — planted in the right spot. It is a spectacular sight when it can grow unrestricted and host wildlife … like White-tailed Kites. The best place to grow Black Cottonwood is away from structures, on a ranch, in a wilderness area or on More Mesa … like the lovely grove on the East side shown above! 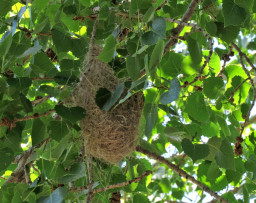 Wildlife Values Important: In spite of the fact that Cottonwoods are not worth much on the timber market, their cottony seeds cause problems in urban areas and they have several other annoying habits, they are one of the most widespread and important wildlife trees in the western United States and Canada. Their value lies not only in their beauty but the habitats they provide.

Cottonwoods are extremely important to wildlife because rabbits, deer, elk, and moose feed on the tree’s shoots, stems and bark. And because insects thrive on them, birds and other predators that feed on insects also prosper on these trees. Raptors like Eagles, Osprey, Hawks as well as smaller birds use Cottonwoods for nest sites and once Cottonwoods start to die, cavities in the trees are used by over 40 animal species for nesting or roosting.

Useful … But Not Furniture: Black Cottonwood is a commercially valuable tree and generally known as a good light wood. Its economic uses include coarse lumber, plywood and the manufacture of wood products for pallets, boxes and crates. The pulp is also used for tissues and high-quality book and magazine paper. Cottonwood resin is used in medicine, as well as for perfume and cosmetics.

Useful for a Long Time: Black Cottonwood has been utilized for thousands of years in our area. Chumash people employed Cottonwood poles for structural supports in construction of their homes, for bowls and occasionally for dugout canoes. Medicinal teas were made from the bark of the Cottonwood to bathe broken or bruised limbs.

And for clothing, Dr. Jan Timbrook offers us the following description in her book “Chumash Ethnobotany” …

“Poorer women wore skirts made from Cottonwood fiber, as opposed to the tanned animal hides, including deer, fox and sea otter that wealthier  women wore. To make a skirt from Cottonwood, they stripped the bark from the green tree, dried it and then softened it, by bending it and rubbing it with their hands. This fiber skirt was worn belted at the waist and consisted of two parts, a front flap and a back flap. Both these parts were woven across the top with cordage of the same Cottonwood fiber, leaving the remainder to hang in strips like long fringe that reached the knees.”

Familiar Sounding Places: Cottonwoods are in the Poplar genus, and the Spanish name for Poplar is “álamo,” “Alamo” has lent itself to some famous places in America, such as the Alamo in San Antonio, site of a famous battle for Texan independence, as well as Los Alamos, New Mexico, site of American nuclear laboratories. However, the romantic sounding name of another New Mexican town, Alamogordo, actually means “the fat cottonwood tree.” (Not so glamorous.)

Where Are They? You can find Black Cottonwood in many wild places in the Santa Barbara area. Indeed, the Spring “snowfall” is happening right here, as I write. If you hurry out now you can see it along the Atascadero Creek Bike Path. There are also three beautiful Cottonwood stands on More Mesa. Some of the tallest of our Cottonwoods are in a grove that is clearly visible from the heavily used main North-South trail on the eastern edge of More Mesa. There is also another lovely group at the end of the “railroad cut” on the northern edge of More Mesa … right below the S.B. County owned “More Mesa Open Space”. Visit these places, feast your eyes and listen for the magic.