Last month we discussed the Coastal California Poppy and how the Cheadle Center for Biodiversity and Ecological Restoration (CCBER) collects seeds of this native plant on More Mesa. However, in addition to poppies, More Mesa is a very valuable source in the collection of many other important native plants. These include Blue-eyed Grass, Coastal Sage Scrub, Owl’s Clover, Fiesta Flower, Miniature Lupine, Sky Lupine, California Sunflowers and several wetland species.

So what’s all the fuss about native species anyway? As it turns out, native species of plants are genetically suited to the local environment. This means, for example, that in situations where droughts occur, or where humid conditions occur, the natives can “handle” what Mother Nature tosses at them. The flip side of this equation is that non-natives may not be able to prosper or even survive in these situations. For example, in the case of poppies, our native species is able to thrive on Santa Barbara’s foggy coast during “May Mist”, “June Gloom” and whatever other humid condition we live with. However, non-native poppies are prone to powdery mildew and have a much lower probability of thriving.

Nobody wants to live without our lovely, cheery poppy … or any poppy at all! We applaud restoration efforts that are targeted toward removing hybridized versions of our native populations and replacing them with plants from the seeds of natives. To do this, native seeds must be collected, propagated, planted and managed. These are the tasks of the CCBER and other organizations that are committed to preserving our native species and our very special favorite, the Coastal California Poppy.

More, Much More, about Poppies
There is much to say about the California poppy. One botanist from UC Berkeley found 70 different subspecies in different parts of California, each varying slightly from the others. The Jepson Manual, the most current California flora, lumps them all together, because they do cross and mingle characteristics.

It has been so interesting to grow our own form on the coast. As a perennial, it behaves quite differently from the annual inland orange form. The tap root can get immense, as long as two feet, and thick as a baseball bat.

In dry years, it flourishes, and I used to worry that it was too aggressive, eliminating other wildflowers. Then I observed that in wet years, it was substantially knocked back, because it doesn’t like wet feet. Now I just relax, counting on an ebb and flow of the coastal form of the California Poppy, so that it is only one element among many in the garden. 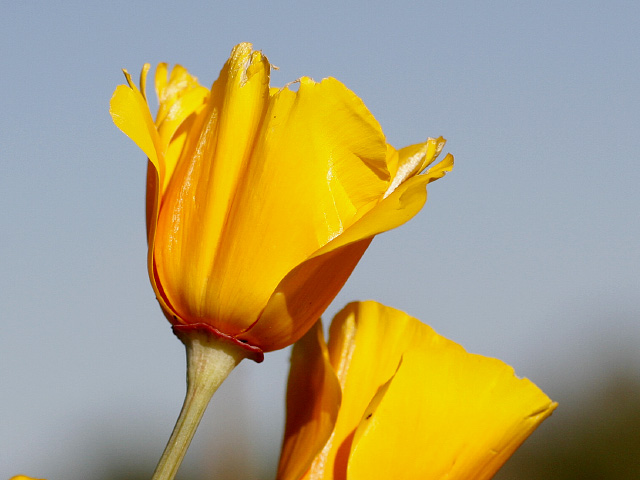