Because of this, the first nesting attempt by the affected kite pair failed, and in a second attempt, the pair chose a stand of oaks at the end of Vieja Drive very close to More Mesa. Their presence on Vieja Drive was noticed briefly between May 30th and June 2nd, the first time while I was swimming in the Association’s communal pool early one morning (in trees 4 & 5). On June 3rd, the nesting tree was discovered. 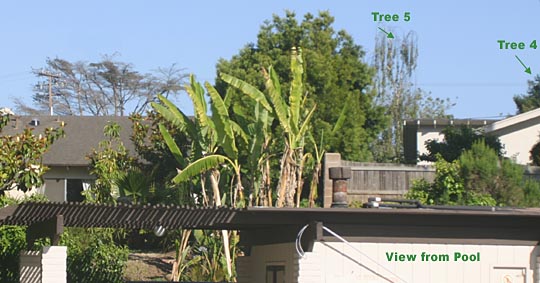 What follows in the next five pages is a story in pictures of the activities of the parents, and the hatching and fledging of the chicks. Almost immediately after the chicks had started to fly, they were sent to More Mesa by the parents – very fast move from the nest by normal standards – because More Mesa has the open spaces where the young kites can learn to hunt.

Difference in appearance between adult and young kites.
The following excerpts are from an essay (SBCC class paper) about White-tailed Kites on this site, at this link.

“The white-tailed kite is a mostly white, falcon-shaped, raptor fifteen to seventeen inches long. The adults have pale gray backs and upper wings, with the head, under-parts and long tail all white. (2). The underwing coverts are black as are the scapulars on the back (3).

There is little difference between the sexes, except the females tend to have darker backs than males (3). The short legs and feet are yellow, the bill black and the eyesred (3). Young kites have brownish areas on the breast and back, a dark band on a pale gray tail (2) and yellow eyes (3). “

“As they grow older, the brownish coloring of the young feathers on the breast, head and back begins to fade and the young appear more like their parents. From five months to a year, a young bird is best distinguished from an adult by the difference in eye color; the adult eye color is red, that of the youngster brown. (8)”

Notes: Since the nesting in 2004, the vacant space in that area has been converted into a small home association, Hacienda Vieja. No kites have attempted nesting in that tree or area again.