Introduction
In our literature, movies and conversations, the highest praise we give to those with excellent vision is to say someone is “hawk-eyed” or “eagle-eyed”.  And, this admiration is both accurate and well-deserved.  Raptors have long been admired for their keen sense of vision, a key element in helping them to locate and track prey. There are several features of the raptor eye that contribute to its remarkable vision.  Most of these have been studied and described repeatedly in the literature and are well known by professionals, and lay people alike.  This short article will not only touch on these well known features, but will report on a relatively new finding; the ability of raptors (kestrels, kites, falcons etc.) to “see” in the ultraviolet, and how they use this ability to aid them in hunting.

Physical Aspects of the Raptor Eye: Bigger and Stationary
The remarkable raptor eye is adapted in several ways.  First, like many other birds, raptor eyes are very large in relation to the size of their skull and their body mass. But raptors are not able to move their eyes around in the way that humans can, as their eye movement is limited to within the eye’s bony socket.  Instead they have extra bones in their neck; bones which enable them to move their whole head around. Indeed, some raptors, like owls, can rotate their heads as much as 270 degrees! In addition, the forward placement of raptor eyes gives them good binocular vision, thereby facilitating very accurate judgment of distance.

Sensory Cells
Visual acuity, the ability of the eye to focus, clearly and sharply, on an object as it becomes smaller or more distant, is based on the number of visual cells in the eye.  For example, we humans have 200,000 visual cells per square millimeter, but birds have a much greater density of visual cells.  Even small songbirds have twice the density we do.  However, the European Buzzard, the visual cell grand champ, has one million cells per square millimeter, giving it a visual acuity 6-8 times that of a human.

In addition, the cells of raptors are not distributed uniformly across the eye.  There are more cells in that part of the eye that looks at the ground and less in the part that looks at the sky. It is this cell arrangement that makes diurnal (active during the day) birds of prey sometimes appear to be engaged in painful head and neck contortions. 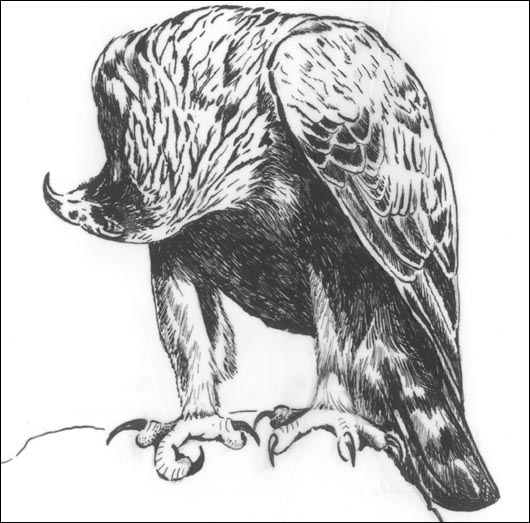 Strange head contortions like this golden eagle’s are executed by diurnal raptors
to improve their overhead vision. Sketch by Julie Ann Collier

Color
Distinguishing color is important; even for raptors. Like us, all diurnal birds see in color, because the cones (color detecting cells) that give them such keen eye-sight also allow them to see colors.  What role does color play for a raptor?  Most importantly, colors allow them to differentiate prey from background, and subtle color shadings increase the probability of prey capture.  This is so important that, while humans have three sets of cones, most birds have four sets of cones with one additional set beyond the blue range.  Color is also important in reproduction, as nestlings often display brightly colored mouths so that it is easy for parents to feed them.

Color is important to all raptors, except the owl.  Owls do not need cones, as they are nocturnal, and hunt by sound, rather than visually.  Their eyes are therefore rich in rods (light detecting cells) and sparse in cones.  From this we can conclude that because cones are responsible for color discrimination, an owl’s world is probably one of blacks, whites and grays, with a very limited amount of color.  However, color is important to Burrowing Owls.  This species, found every few years on More Mesa, is active during the day.  Not surprising they have more cones in their retinas and are able to see more colors than their nocturnal cousins.

Ultraviolet (UV)
Perhaps the most remarkable refinement to avian vision, in general, and raptors, in particular, is the ability to see in the ultraviolet (UV) light range.  For raptors, who prey on rodents like voles and mice, this ability gives them a distinctive edge when hunting.  Specifically, rodents, like many other species, use scent as a communication mechanism; marking territories, mating etc.  Therefore, in these species, long scent trails become obvious markers of where the animal has been.

For a long time, researchers were aware that scent marks of small rodents become visible when scent markings absorb part of the UV radiation present in sunlight, and then reemit the absorbed energy as visible light; the process of fluorescence. However, a recent finding shows that scent marks left by voles (who urinate almost continuously), are also detectable by kestrels from reflectedUV light (3). The figure below shows that the same markings are much more prominent in the UV, than they are in the visible(4). 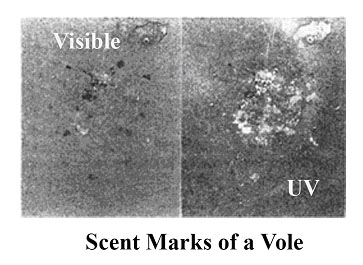 This ability, to perceive reflected UV, is particularly useful in the spring before the scent marks are covered by vegetation. For raptors in treeless areas (such as grasslands and farmlands) this means they can rapidly screen large areas in a short period of time, and perceive rodents by simply following the ultraviolet trails that delineate their movements.  These UV trails appear black to the bird.  The White-tailed Kite has a similar hunting strategy, and prey preference, as the American Kestrel.  Therefore, it is almost certain that the White-tailed Kite, the signature bird of More Mesa also exhibits this ability. Lastly, the ability to “see” in the UV means that diurnal raptors are likely to have a minimum of four sets of cones and perhaps even five or six.