As reported in our last update, the California Coastal Commission (CCC) was extremely supportive of MMPC’s positions on preservation of More Mesa, and supplemented them with even stronger language than currently existed in the new Eastern Goleta Valley Community Plan. At a meeting on November 7th, the County Board of Supervisors approved these California Coastal Commission modifications. Our very special thanks to everyone who spoke in favor of the recommendations at the meeting, attended the meeting or sent e-mails. We never could have achieved this wonderful result without your help. 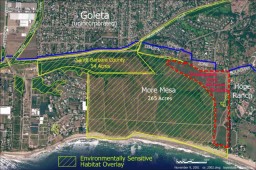 To learn more about the Coastal Zone and California’s beaches, visit beachapedia.

This month we have some excellent news about our famous “signature” bird … the White-tailed Kite.
White-tailed kites are semi-social animals that gather in communal overnight roosts in the fall and winter. Kites can begin to gather in late August or September, with roosts typically breaking up not later than February. The dynamics of roost occurrence are not well understood and roost occurrence can be difficult to document without continuous observations at dawn and dusk over an extended time period.
One of the largest known communal roosts for White-tailed Kites in California was found on More Mesa in 1965, with the greatest numbers recorded in the mid 1970s. Moreover, during the winter of 1978, a record 110 birds were observed roosting on More Mesa! However, for a variety of reasons, roost population exhibited a precipitous decline to a low of 40 in 1998. After that, roosting was sporadic for nearly a decade with the last known roost of 16 birds recorded in 2003. UNTIL NOW!
In late August, after nearly two decades, the White-tailed Kites appear to be, once again, using their traditional communal roost on More Mesa. This is especially good news because the recent drought (driest period on record in California history) had precipitously reduced the number of kites in the entire Goleta Valley. For example, there were 15 nesting pairs of kites in 2012, at the beginning of the drought, and only a single pair in 2016 … and that pair was at More Mesa.
Now, this fall, as many as twelve birds have been observed at the traditional More Mesa communal roost. This is yet another indication of the recovery of these important bird species in our area. Unhappily, and for two separate reasons, the roost is not as safe as it once was. First, the historical roost area has become part of a heavily used trail, and second, the recent plague of hundreds of aggressive crows on More Mesa poses yet another problem for our lovely and light weight kites.
To learn more about White-tailed Kite roosting check out pages 31-32 of the More Mesa Handbook.

You can Help… Tread Softly

Because roosting birds are easily disturbed, walk and talk softly when you are out on More Mesa, especially in the late afternoon and the early morning. Now that our favorite birds have “come home to roost”, we don’t want them to be frightened away.