You may have noticed that there was no hunting for treasures last month. We guessed that you all were busy enough with the dual tasks of keeping safe and the holidays. Instead, you received a version of our yearly holiday greeting; a beautiful photo of a White-tailed Kite wearing a Santa Hat. This is the typical holiday card our supporters receive each year, along with a brief message from a respected environmental hero. This year, and in keeping with the unusual nature of 2020, we sent a longer message and one hopefully more appropriate to the times we are living through.
Sitting Kite 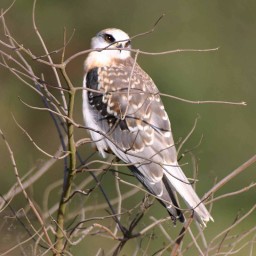 White-tailed Kite: The beautiful White-tailed Kite is the signature bird of MMPC and has been associated with us since we began our work more than 20 years ago. Because Kites are so very special, they are one of only 12 fully protected birds in the state of California. Our state’s classification of “Fully Protected” was, and remains, a way to identify and provide additional protection to those animals that are rare or face possible extinction. Further, with regard to the Federal Government, even though the White-tailed Kite is not listed as under the Endangered Species Act, it receives protection under the Federal Migratory Bird Treaty Act. Both of these are very serious protections! 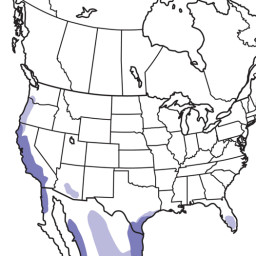 Where Are They: White-tailed Kites can be found on the West and Gulf Coasts of the United States and into Central and South America. Locally, they can be observed year-round along the California Coast, in open grassland, marshes and agricultural areas. Closer to home, our own More Mesa has played a vital role in the recovery of the species, not only on the South Coast, but for the whole state. It has accomplished this because it offers the critical hunting and nesting habitat necessary to support high densities of Kites. Therefore, as agricultural land in the Goleta Valley continues to shrink rapidly, preservation of More Mesa becomes an increasingly crucial part of safeguarding this beautiful bird.

In good years, with plenty of rain, you can find several pairs of Kites in different areas of the Goleta Valley. In bad years, such as the protracted drought we are currently experiencing, we are lucky to have a single pair … and that pair, almost always makes its home on More Mesa. The historical site for a single pair has repeatedly been on Eastern More Mesa just north of the Cottonwood Grove, but this year things seem to be changing. We have at least one resident pair seen either in the central or western part of More Mesa.

Beautiful and Easily Seen: The White-tailed Kite is a small hawk, easily identified by the all-white body and tail, and the black wing patches which are visible in flight or sitting. The open wings are sharply pointed with a three-foot span. Juveniles can be identified because their chest and head are lightly streaked with reddish/reddish orange color. And … all Kites have red eyes! But the dead-giveaway for a White-tailed Kite is their unusual hover flight when hunting. (More on this later.)

It is for this reason that droughts are particularly hard on Kite populations. Low rainfall does not encourage prolific grasslands and their all-important seeds. Less food for the rodent population translates into fewer rodents and thus less food for Kites. 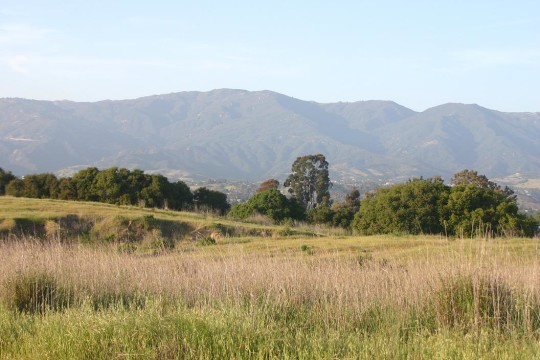 Hunting Strategy: White-tailed Kites almost always hunt by hovering. (Watch this video to truly understand what is going on.) This distinctive hover behavior lasts up to a minute and ends with a successful prey strike only about 10% of the time. 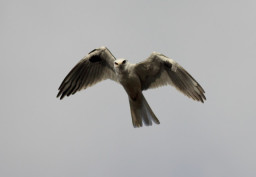 During “the hover”, the Kite is searching for prey, but in a very unusual fashion. As we have learned in past Treasure Hunts, avian vision is different for different species, and extremely well adapted in many remarkable and extraordinary ways. Their most incredible adaptation is their high resolution eyesight. However, the most unusual adaptation for avian vision, and raptors in particular, is the ability to see in the ultraviolet (UV). For those birds, who prey on rodents like voles and mice, this ability gives them a distinctive edge when hunting. This is because their prey, rodents, like many other species, use scent as a communication mechanism; marking territories, mating etc. Therefore, in these species, long scent trails become obvious markers of where the animal has been. An easier way to explain this is that rodents urinate by constantly “piddling”, leaving a trail behind them wherever they go. The usefulness of this habit to a hungry Kite takes a little explaining.

The explanation goes like this. For a long time, researchers were aware that scent marks of small rodents become visible when these markings absorb part of the UV radiation present in sunlight, and then reemit the absorbed energy as visible light. This is the process of fluorescence. However, a recent finding shows that scent marks left by voles (who urinate almost continuously), are also detectable by kestrels from reflected UV light. You might compare all of this to how a plane lands by watching the markings on the runway of the airfield. Clever … right? 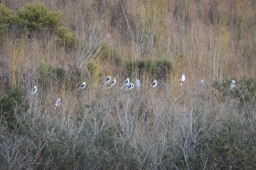 Meeting Up: White-tailed Kites often have winter get-togethers in what is known as a communal roost. The “roost” is when a group of individuals, typically of the same species, congregate in an area based on some external signal. In the case of Kites, that signal is nightfall. Once the roost is established, the birds return to the same place every evening around dusk. The benefits of this gathering could include better hunting, warmth, protection from predators and just plain “getting together with the gang”. (I learned a new phrase for this benefit; “conspecific interactions”.) While watching Kites in a recent large roost (see photo by Barry Rowan), I was also told by a well-known and recognized local birder, that he thought the juveniles were especially focused on the roost so they could select the best partners for the spring nesting season. (Does this remind you of going to the dance at the gym to pick out the best guy or gal to be with?)

Historically, More Mesa supported one of the largest White-tailed Kite roosts in California. At one point, it was thought that 5% of California’s population resided here. Sadly, the Kite population of the Goleta Valley continues to decline as agriculture disappears and urban pressure takes its toll. As a result, roosting has been sporadic for almost two decades. However, when the drought took a year off in 2019, the Kite population exploded and we were privileged and delighted to be able to observe roosting on More Mesa; as early as September. Although there are only 14 Kites in the photo above, there were up to 28 birds spotted at various times and it was a real treat! 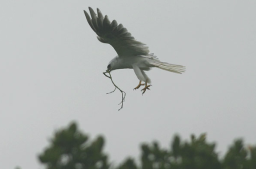 Keeping the Species From Disappearing … Chicks: More Mesa is considered the most important location for White-tailed Kite nesting on the South Coast. Because of the significance of this special bird, researchers have been studying and recording More Mesa’s Kites for nearly half a century. In pages 29-33 of our award winning More Mesa Handbook you can see that More Mesa consistently supports from one to three nesting sites with double-clutching (two families in one year) also observed in good rain years. 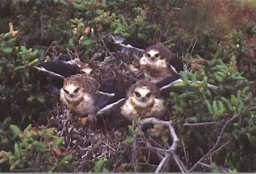 December is courting season for White-tailed Kites. (Perhaps the males are seeking out that one female who caught their eye at the roost?) Courtship can often be in the form of ritualized displays. In one of these, a male offers prey to a female and then, in a spectacular aerial exchange, the female flies up to meet the male, turns upside-down, and grasps the prey. After they are both suitably impressed with one another, the two will form a monogamous pair in December, and stay together year-round. Nest building starts in January with White-tailed Kites typically choosing nurseries in the upper third of trees that may be 10–160 feet tall. The nest, which is made of twigs and lined with grass, weeds, or leaves can be built by the female or the pair. Its construction takes 1-4 weeks. When complete, the female usually lays 4 eggs and incubates them for about a month. During that time, the male brings food to the her and continues to do so until the eggs hatch. However, once the chicks have hatched, dad has to find food for both mom and the growing chicks! Mom is then responsible for transferring the food he delivers to the chicks in the nest. Even after the chicks have learned to fly, they are expecting free meals from dad. And, like most teenagers, they are pretty demanding! You can see that in the behavior in the photo below … where two chicks are competing over food that dad has procured. It is also evident in the header photo where the juveniles are chasing an adult with food. After those two-three exhausting months for mom and dad, the kids are on their own. It’s truly amazing that pairs still possess the energy to raise two broods in a season … even with plenty of food around! 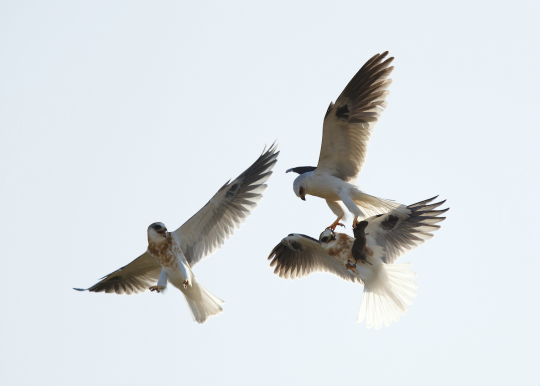 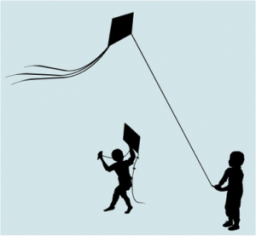 Which Came First?: Ask any group of random folks what a kite is and they will say it’s the paper thing attached to a string that people fly on windy days in Mary Poppins. And it is. Ask the same group why our emblematic bird is called a Kite and they would probably say “because it looks like a “kite”. But it is believed that the bird actually came before the paper thing. Apparently, the word “kite” was derived from the Old English word “cyta” meaning to shoot up or go swiftly. Therefore, the word seemed like a good fit for a bird that could swoop on prey, hover in flight and soar. More than 20 Kite species are found all over the world so millions of people are able to marvel at their airborne ballets. As for the other “kite”, it is believed that the paper thing was originally constructed in China. Its form resembles the bird because the paper kite hovers nearly motionless in the air … similar to Kite behavior. However, it can never match the antics of a living Kite.

White-tailed Kites hunt in the early morning and late afternoon. Come out to More Mesa to observe this beautiful bird that is so very important to save! But don’t expect to see one at lunch!