In the beginning there were reeds and sedges

This Treasure Hunt came to mind from a simple mantra I learned at a water plant class I took many years ago. I though it would be “safe” to start there. The mantra … “Reeds are round and sedges have edges.” But it didn’t take long to figure out I could not have been more wrong!

As I went from source to source I realized I had ventured into a morass of terminology. For starters, the terms reed and sedge were used interchangeably, the mantra above repeatedly replaced “reeds” with “rushes”, and just to make things a little more confusing, some of them threw a catchy addition about “grasses”. Next, literally each of the water plants I researched was, in one reference or another, called a “Bulrush”. “Rush” is the name given to a water plant but no one seems to know where the “bul” came from. (One source offered that bulrush is a biblical word for papyrus.) In many references there was contradiction after contradiction from both extremely reliable sources and amateurs alike. Finally, I decided I would differentiate by using two scientific names. Then found out that one of these had recently been split into 6 or 7 different genera! 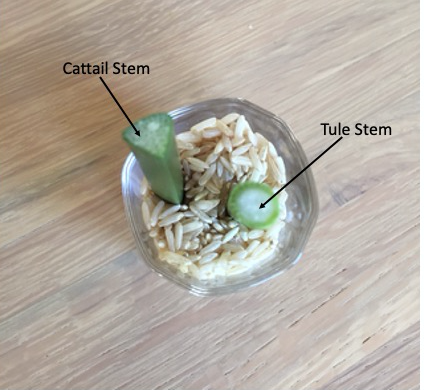 For purposes of this Treasure Hunt I will refer to a duo of water plants often found together, as Tule (g.Actus) and Cattail (g.Typha). From the stems in the photo you can tell that Tules are round and Cattails have edges. It doesn’t rhyme … but, it is anatomically correct.

TULES: Local species of Tule are native to freshwater settings all over North America and in California as well. These plants prefer full sun and grow in standing water as well as mud. Their thick, rounded gray-green stems can grow as high as 10 feet, with three long, grass-like leaves surrounding the stems. The seed head that emerges from the side of the stem near the tip is made up of tiny, pale brownish flowers that bloom and ripen between June and August. Tule has both male and female organs in its flowers and is pollinated by wind. Many species of birds, amphibians, reptiles, and mammals make use of Tule for food, and shelter. Tules also play an important ecological role as they are especially good for stream-bank stabilization, restoring disturbed or degraded areas, reducing erosion and slope control.

CATTAILS: Since Cattails thrive in the same environments as Tules, they often cohabit in many places in Santa Barbara. Like Tules, they can grow to about 10 feet, and they also have long, green, grassy leaves. But it is the male and female flowers that mark the principal distinction between Tules and Cattails. Toward the top of the Cattail stem is a 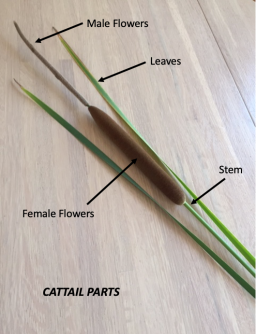 large diameter, brown, cylindrical female flower with a “fuzzy” appearance. This feature is responsible for the plant’s name and makes it easily identifiable as a “Cattail” … although it really looks more like a “corn dog!”

Atop the female “cattail” is a set of male seeds in a smaller diameter cylinder, and also fuzzy. The seeds are minute, 0.008 inches long, and attached to fine hairs. When ripe, both the heads disintegrate into a cottony fluff from which the seeds are dispersed by wind. 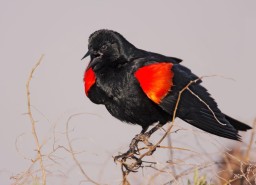 Cattails are important to tiny fish, waterfowl and animals alike. Birds make use of these marshy plants for food and shelter, as well as a source for nesting material. During nesting season, one of my favorite birds, the Redwing Blackbird often makes its home in thick Cattail patches. 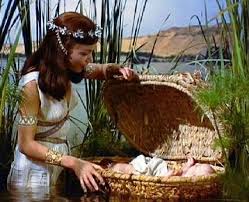 Tules: I’m guessing the whole “Bulrush” thing started with the story of “Moses in the Bulrushes”. However, this “baby in the river” tale is not unique to Moses. It may have originated in the legend of Romulus and Remus who were left in the Tiber, or that of Sumerian King Sargon I, who was  abandoned in a caulked basket in the Euphrates.

From these tales and others, it is clear that Tule has been used for millennia in several areas of the world. In fact, the name “Tule” is derived from a Nahuatl word that was first applied by early Spanish settlers who recognized these plants as similar to those in the marshes around Mexico City.

But while the new settlers were baptizing the plant they knew as “Tule”, Native American groups, including the Chumash, had been using dyed and woven leaves and stalks of Tule for millennia*. From this readily available material, they made baskets, bowls, mats, hats, clothing and houses and boats. Raw young sprouts and shoots and boiled unripe flower heads were also part of the vegetable plate of early people in our area. And a very special and unique use was made of the pith (very inside layer) of the Tule stem to caulk Chumash redwood Tomols; the large and famous canoes that were built to enable brisk commerce between the mainland and the Channel Islands. With all this history, we can see that this readily available plant was both extremely versatile and extremely important.

The term “Tule” is still alive in our culture today. Several places in California recall the Tule; the city of Tulare, Lake Tule, Tule River and Tule Elk. Also, having been trapped in it several times, I am acutely aware of the infamous, ground hugging, impenetrable Tule fog. Also, still with us, is the expression “out in the tules” coming down from the dialect of old Californian families. It implies a place where no self-respecting person would want to live. They should see these locations now … tens of thousands of people live there … and love it!

Cattails: The Cattail is similar to the Tule in habitat, appearance and uses, but has wider leaves. Although the Chumash clearly differentiated the two plants, they used Cattails for many of the same things as they used Tules; for example, the framework and thatch for houses, baskets and mats*. Cattail heads and seeds were eaten and pollen used for medicinal purposes. Parts of leaves, roots and flowers were used to treat various common ailments.
Moreover, the fluff of the Cattail flower was a real boon to Native American moms. It could pad a baby’s cradleboard, function as a diaper, stuff a pillow or mattress, insulate footwear in cold weather and be part of the dressing of a wound. (Johnson and Johnson watch out!)
In more recent history, Cattail leaves were used for rush bottom furniture, baskets and mats and the downy seeds were still used to fill pillows and mattresses. There is also some evidence that Cattail down was used to stuff life jackets as well as the fluff from kapok trees.

Where Can You Find Them?

Both Cattails and Tules can be found in many places in Santa Barbara. My two favorite spots are Lake Los Carneros and Atascadero Creek (beside the bike path). Atascadero Creek is extremely important as it carries flows from four different, watersheds; Atascadero, Cieneguitas, Maria Ygnacio and San Antonio. It is imperative that the flows from these watersheds to the ocean are unimpeded. Therefore, the County periodically removes vegetation from Atascadero Creek before the rainy season to assure that water flowing down the creek can easily reach the Pacific at the Goleta Slough. But you can almost always see these plants at Lake Los Carneros. And if you are a golfer, you can see them at Laguna Blanca Lake at the La Cumbre Country Club.

* For in depth information on the water plants used by the Chumash, consult “Chumash Ethnobotany, Plant Knowledge Among the Chumash People of Southern California” by Dr. Jan Timbrook.