ELDERBERRY …
A TINY BERRY THAT BRINGS THE GOOD THINGS IN LIFE 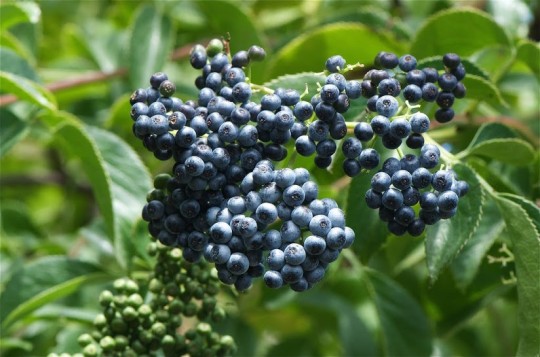 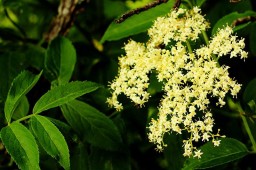 There are several species of Elderberry in the U.S., with the most common in the West being the Blue Elderberry; a deciduous shrub that can grow up to 30 feet high. Its leaves, 4 inches long and 2 inches wide, are arranged in opposite pairs with 5-9 serrated leaflets. In late spring and summer, the shrub bears tiny white elderflower clusters that can form into a group as large as 12 inches in diameter.
Flowers are pollinated by insects, and as the season progresses, the flowers fruit into drooping clusters of hundreds of dark purple to black berries.

Then, in order to preserve moisture and nutrients, Elderberry will lose their leaves in late summer and turn green again with early winter rains.

Having said all of the above, I realized that the Elderberry I have been following the past three weeks is just now starting to flower … at a time when it is supposed to be bearing fruit! This realization caused me to have a genuine “crisis of confidence” and I began to think I was following another species and had definitely “blown it”. After several hours of scrutinizing pictures of the leaves on “my Elderberry,” I was positive that “my Elderberry” was indeed an Elderberry. That left another question, “What was going on with my Elderberry?” After consulting two experts on this issue, I learned that because of our variable and unpredictable California climate, Elderberries sometimes flower and fruit more than once a year. I guess this means that mine will be bearing fruit around Halloween!

The berries of the Elderberry are edible, but only when cooked! Other parts of the plant, leaves, stems, roots, seeds and unripe fruits, are toxic … more on this later.

In the Past – The elderberry was extremely important to many native people for its numerous and varied uses, including food. Native inland groups harvested the berries in very large quantities throughout the summer and then carefully dried and preserved them for use in the winter. The berries were cooked into a rich sauce that needed no sweetening. Frequently, native families subsisted on Elderberry exclusively during long periods of the winter.

Although elderberry was not important as a food source for the Chumash, it was key to acquiring and preparing much of the protein in their diets. Why was that? Because elderberry wood is extremely hard, it is an excellent source of wood for tools. In particular, its branches were of prime importance in the making of bows and arrows for hunting. Chumash straight bows, called “self bows” were about 4 feet long and made of a single piece of elderberry wood. Unlike composite bows made of wood and sinew, these self bows could be taken on sea voyages, and did not become useless when they got wet. Because of this hunters could cross the Channel in their Tomols and were able to hunt on the Channel Islands, as well on the mainland.

Shoots and branches of elderberries are filled with a soft tissue called pith, tissue that can be easily removed to leave a hollow tube. These tubes are well suited to serve as arrow shafts, that handily complete the bow/arrow pair for hunting. Other uses for the hard wood of Elderberry included squirt guns, blow guns, combs, spindles and pegs.*

What About Cooking?  When it was time to cook, elderberry branches were made into “fire sticks”. Remember the old boy scout trick for starting fires … twirl a pointed hardwood stick until you get sparks and ignite some soft material (like dried pith)?  Voila … fire!  And yet another hollow stem could be used as bellows to blow air into the center of the fire.
After dinner … or any other time as well, might be time for a “smoke” … although much of the smoking was done before dinner. Hollow tubes made great pipes. And the tobacco? It was carried in those hollow tubes that had been converted into containers by plugging up one or two ends.
Today – Traditional methods of enjoying Elderberry include jams, jellies, syrups and pies, all of which are made by cooking down the fruit and straining out the seeds. (The elderberry jelly that I ordered from New Jersey just arrived and while its principal ingredient is sugar, it has a lovely, subtle flavor that I really liked.) And if you need a beverage for a really big celebration, you can serve elderberry wine or liqueur made from fermented berries. 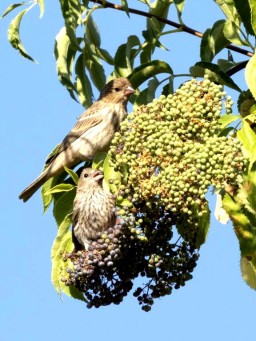 The importance of Elderberry for wildlife in various areas has been widely recognized. Numerous species of mammals and birds are known to consume its fruit or foliage, and apparently, they don’t have to cook the fruit first. For example, Elderberry is an important food source for native songbirds including western bluebird, ash-throated flycatcher, white-crowned sparrow and California thrasher.

Birds also utilize larger elderberry shrubs for nesting sites. And happily, we have an example, right here on our very own More Mesa. Many of you know the significance of our signature bird, the White-tailed Kite because of its designation as a “California Bird of Special Concern”. In good rain years (lots of food) we have up to three nesting pairs on More Mesa. However, even in poor rain years we consistently have at least one nest at the most important, and historic, eastern nest site. Where is that nest … in a patch of Elderberries! Learn more about raising kite babies on the “Birds” section of our website.

For the Chumash, musical instruments were also one of the major uses for elderberry wood. The hollow stems were fashioned into flutes and whistles. Holes to create the various notes were drilled with hot sticks. The elderberry flute, played for enjoyment and courtship, has 2 voices, and sounds different from each end. Unlike most flutes, which are played at the side of the mouth or straight down, this is played at a diagonal. And instead of a blow, it will just take the tiniest puffs, puffs that are very subtle.

The Chumash also used Elderberry to make a split stick rattle that could be played by striking it on the hand or body, bringing it to a sudden stop or rapidly shaking it to produce clapping sounds. A third instrument, a bullroarer, was a piece of flat elderberry with a fiber string attached to one end … played by whirling it overhead to create a scary, whirring sound.*

The Elderberry is a Pharmacy

Berries of the Elderberry are one of the richest sources of vitamin C and also boast a high content of vitamin A, calcium, phosphorus and iron. Along with the flowers, they are packed with antioxidants and vitamins that may boost your immune system. Through the ages it has been extremely useful to people all over the world and to this day, is still widely considered one of the world’s most healing plants in alternative medicine.

In the Past: The written history of Elderberry dates as far back as 400 BC and Hippocrates, the “Father of Medicine”. He called the Elder Tree his

“medicine chest.” In the middle ages, Elderberry was considered a Holy Tree capable of restoring and maintaining good health, and as an aid to longevity. Native People in California used different preparations of flowers and leaves for various reasons; to treat colds, sore throats, fever, and also to induce sweating and relieve aches and inflammation. Poultices made from the flowers were used to treat wounds, improve the complexion, tone and soften the skin, and lighten freckles or spots.
It is well documented that the use of Elderberry as a pharmaceutical was as
important to the Chumash as its use for tools.*
Today: Today Elderberry continues to be lauded for its medicinal values. Modern compounds of Elderberry are used for many of the same reasons Elderberry was used by Native People and to aid in treating additional modern medical problems as well.

Use With Care, There are Risks

The leaves, stems and roots of the Elderberry, as well as the seeds in the berries, have chemical compounds in them that metabolize into cyanide. Simply put, they are poisonous and can make you very ill! The only part of the plant that can be eaten is the fruit … but only after it is cooked.

Lots of Folklore and Magic Surround the Elderberry

It was believed in medieval times that the most likely time to encounter fairies was on Midsummer’s Eve, and under an Elder Tree. They also contended that chopping down an Elder Tree could release a spirit called the Elder Mother, who would take her revenge unless you had asked her permission first, and chanted her song. During various pagan festivals, people wore elderflowers to protect against witches and elderberry was planted to banish witches in various parts of the world. The wood of choice for making flutes used to summon spirits was, of course, Elderwood. 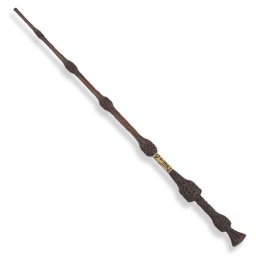 And finally, we will end this Treasure Hunt with the “Elder Wand”, the most powerful wand in the wizarding world of Harry Potter … the one wand to rule them all. Wizards think Elderberry is pretty great too!