Many members of this treasure’s family live on More Mesa. However, they may be more difficult to see, although easier to hear … especially if you are willing to venture out onto More Mesa at night. The last Christmas Bird Count recorded a phenomenal six separate species of owls on More Mesa. Over the many decades we have been collecting sightings data, these are the most owl species ever recorded, at one time, and there are some species we have rarely, if ever seen!

The largest of our hooting avians is the Great-horned Owl at 23 inches. Significantly smaller are the Barn, Short-eared and Long-eared Owls, all of which are between 13 and 16 inches. Our tiniest owls are the Burrowing and the Western Screech Owls, about 10 inches

Although we think of owls as hunting only at night, that is not the case. (More about this when we look at owl sight.) You can quickly determine the hunting habits of an owl by the color of its eyes; black or brown hunt at night, yellow hunt at dawn and dusk and orange hunt in the daytime. However, a majority of the owl family are nocturnal creatures and do most of their hunting when light levels are low. Why? Because many owls hunt for rodents, and rodents are active at night. The next obvious question is, “How does an owl hunt in the dark?” The answer is that its head, and all the elements of the head have evolved precisely for this very purpose; that is, hunting in the dark. Specifically, owls have incredible sight, a neck that can rotate its head a full 270 degrees and amazing hearing.

This treasure hunt proved to be so fascinating and interesting that the tale could not be told in a single issue. So, the story of the Owl will come in two parts; first we will describe all the functions that are carried out in the head and the next issue will conclude the tale with details of what happens in the rest of the owl’s body.

Owls have extremely large eyes, in a very small skull. The eye is tubular in shape, accounts for up to 5% of the owl’s weight and is held in place with bones. It’s definitely nothing like our eyes, that are round, weigh .0003% of our body weight and are held in place with muscles. Light collection is also aided by a reflective surface behind the retina which reflects the image back after it has passed through the eye. This gives the owl a chance to collect twice the light for discerning the image. That information is then passed on to the brain.

We discussed rods and cones of bee eyesight in an earlier Hunt. Cones are important to bees since they have a great need to see colors. For owls, it’s all about rods! Faced with low light levels, you need lots and lots of rods. Indeed, owls have 5 times as many rods as humans, one million rods per square millimeter! As a result, they can see 35-100 times better than we can at night. For example, Barn Owls can see a mouse at 6-7 feet with an illumination the equivalent of the light of a match a mile away.

The downside of owl vision is that they are very farsighted, and cannot focus well on objects that are within a couple of inches. So, to compensate, Mother Nature has equipped them with whisker-like tiny feathers (filoplumes) around their beaks and feet to help them detect objects close in, as well as “feel out” the food they have captured.
Another factor on the “upside” is that most bird eyes are usually at their sides, but owl eyes face forward, as do ours. This means owls also have binocular vision, similar to ours, and it gives them increased depth perception … even in the dark. A final feature of owl eyes is that the iris of the eye can adjust so owls can see in the daytime, unlike other nocturnal animals that can only see at night.
And to wrap up, these, oh so important, owl eyes are well protected with three eyelids. The upper eyelid closes down when the owl blinks and the lower closes up for sleep. The third is a translucent membrane that moves horizontally from the inner corner of the eye to the outer. Its task is to view prey, while keeping the eye safe during the last part of the capture.

The Swivel … Takes it All In

With its huge eyeball, held in place with bones, an owl cannot roll its eyes to look around. Instead, when pinpointing prey, it moves its entire head, an incredible 270 degrees in either direction and 90 degrees up and down. How can it achieve these feats? First, owls have twice the number of vertebrae in their necks as other birds. And second, they have a blood pooling system that collects blood to power their brains when neck movement cuts off circulation.

When they cannot see their prey, Owls rely on hearing. A hunting owl, therefore, will use the calls and movements made by a mouse, vole or shrew to direct its strike. These sounds are channeled in many owls by a very pronounced facial disc, which acts like a “radar dish”, trapping and focusing the sounds into the ear openings. Even the owl beak is designed pointed downward to maximize sound collection.

Owl ears are hidden inside feathers and they are higher on one side than the other. This positioning allows the owl to pinpoint and position its prey by turning its head until the sound reaches both ears at the same time. The accuracy of this sound/brain interaction is 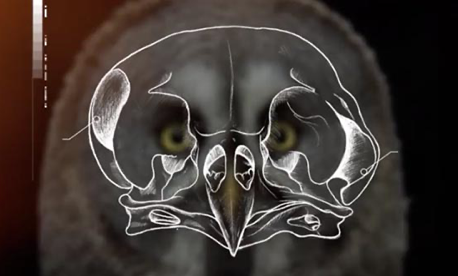 such that owls can detect a left/right time difference of about 30 millionths of a second! To see owl hearing in action, check out this video of a Great Gray Owl. This species lives in evergreen forests in the far north and on high mountains. In these environments, prey is very often beneath the snow, even in summer. As a result, the Great Gray is virtually blind when it hunts. It seems “flying blind” isn’t a problem when the rest of your face is configured to listen.

Be on the lookout for Part II of the Owl Story that will discuss flight, hunting, food, digestion, reproduction and owls in mythology. More fun to come!

We are indebted to owlpages.com for providing very professional and accurate information on owls.