The day we knew was coming, but wouldn’t welcome, arrived.
In late July a group with the same members who circulated development plans for More Mesa three years ago, announced that they represented the Kalid Saud Al Shebaily Group (KSSG), owners of More Mesa.

The new group’s opening salvo came in the form of objections to a number of the provisions in the updated Eastern Goleta Valley Plan (EGVP). This salvo was summarily rejected by the County. Later in the year, at a subsequent Board of Supervisors Meeting on the EGVP, a local representative of KSSG said, “We do support adoption of the plan and note that there are no proposed changes affecting the More Mesa property.” However, later in his testimony, the same speaker remarked that some of the development standards needed to be revisited at a later time … a phrase that would seem to indicate that the owner really did not agree with the fact that there were no proposed changes.

Drought etc.
The record-breaking drought we have been experiencing occupied our thoughts and concerns for most of the year. We reported its effect on birds, plants and animals as well as increased danger from falling trees and eroding cliffs. Because our geographical area experiences regular cycles of drought and floods and an El Niño is predicted for this winter, we have added a special feature on this weather phenomena on our web site.

White-tailed Kites Have the Last Word!
All through the spring and summer breeding seasons we looked in vain for signs of kites and kite nesting. This continuing disappointment was reported in several monthly newsletters. We despaired that 2015 would be the fourth “no chick” year for More Mesa. But in late summer the kites had apparently found a way! Four kites were spotted on the west side of More Mesa and even more exciting was the presence of three juveniles in the group. These three appear to have moved on, but a pair of adults still remain with us.

Plans for 2016
Despite mixed signals from the developers, 2016 is likely to be the year that our fight against development of More Mesa begins in earnest. We need to prepare. Therefore, we plan to raise $150,000 as a contingency campaign fund soon after we finish our planning in early 2016. I will be sure to keep you updated on developments.

El Niño: A New Feature on our Web Site
Weather is critical to what happens on More Mesa. Drought and its effects on More Mesa have been discussed over the last several years. Now with a “too-big-to-fail” El Niño about to alleviate some of that drought, a new section Ecology->Climate and Weather, has been added to the website for more information about our local weather. Two of the videos from that section are repeated in this post.

Droughts to Floods: Weather and Climate in Southern California and Potential Impact of El Nino

by Eric Boldt of the National Weather Service
Click on the heading if the video does not display in this page.

One of the clearest explanations of El Niño, La Niña and the southern oscillation, with excellent animation.

Finally … we urge you to please use extreme caution in windy weather and after it rains!
There is a reason they call Eucalyptus trees “widow makers.” They are brittle and often break off branches or fall during wind-storms. We have always advised visitors to More Mesa to stay away from these trees when it is windy. However, all our trees and especially Eucalyptus are in a very weakened condition as a result of the drought. This means they will be much more likely to splinter and break after severe rain events as well. Unhappily even our sturdy oaks, native to the area and generally adapted to droughts, are weakened and failing as well.

White-tailed Kites Have the Last Word!

In the March News of this website we reported that there was evidence of potential nesting for the White-tailed Kite. This was welcome news as our famous signature raptor, a bird that historically lives and breeds in profusion on More Mesa had not produced a single chick for at least three years. And as the months went by with no further nesting signs we despaired that 2015 would be yet another “no chick” year. Now, we are delighted to report that the kites have found a way!

One of our most avid and dedicated birders, Jessie Altstatt, had been seeing one or two kites, all through July. Then, in late August she suddenly noted four kites. They were in the oaks close to Atascadero Creek on the north edge of More Mesa. Even more exciting was the conclusive identification of three juveniles among these four! The markings of juvenile kites are clearly shown in the accompanying photo, courtesy of Mark Holmgren. These are bold white margins on most of the dark feathers and gold breast feathering.

On another note, further identification revealed that this group was definitely not the family that bred in July at Lake Los Carneros.  Bottom line … this sighting, while it is exciting news for More Mesa, it is only our second kite breeding event in the entire Goleta Valley this season.

An additional observation about food, yields even further “food for thought.” The four birds reported were observed feeding on a larger mammal; perhaps a ground squirrel. This food choice is extremely interesting in that kites in the Goleta Valley almost always rely on California Voles, or to a lesser extent, on other vole-sized mammals as a food source.

Independent gets it wrong, but MMPC gets it right!

While the announcement of potential development was no surprise to any of us at the More Mesa Preservation Coalition, a recent article in the Independent (30 July 2015) , in response to a More Mesa Press release (here and here),  got it wrong. We have been tracking the possibility for development almost on a day-to-day basis for more than a year now. And while we did not know exactly when the owner of More Mesa would choose to announce the potential for development, we were expecting it.

We were also expecting the developer to take exception to restrictions which have been in place for More Mesa for decades, as well as to seek approval for a much larger development. Which they did as well; in an attempt to expand the development envelope in the Community Plan. Finally, while none of these moves by the developer was a surprise, the task ahead is daunting and we will need all the volunteer time and financial help our community can muster.

I will keep you posted.
Valerie

Well, the day we knew was coming, but wouldn’t welcome, has arrived.

On Tuesday, Kenneth E. Marshall, President of the development consulting firm Dudek, notified the Santa Barbara Planning Commission that he represented the Kalid Saud Al Shebaily Group (KSSG), the owners of More Mesa. He is joined by Jack Theimer and Kim Kimball.

The new group has sent their opening salvo in the form of objections to a number of the provisions in the updated Eastern Goleta Valley Plan. The centerpiece of their early effort is to raise the number of houses permitted to be built on More Mesa to more than the 70 that are currently allowed.

Mr. Marshall’s objections came just two days before this morning’s Planning Commission hearing to approve the plan. We were also there … as we have been throughout this entire nine year process. Dudek’s letter seems to be an initial feeler about development. We know there is probably much to come and we will keep you posted. We are assured by the Planning Department that no plans have been submitted and it is not clear whether or not any plans currently exist.

Look for further news in special alerts, monthly e-Updates and in the Monthly News on our web site.

Thanks for caring about More Mesa! 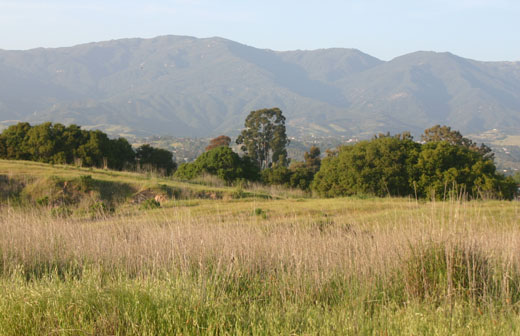