Today’s Treasure Hunt is about snakes. Unhappily, snakes have a really bad reputation. To start with, the word “snake” is firmly embedded in our language and used by millions of people who have never even seen a snake! We call someone who is treacherous or worthless a snake, and when an individual is untrustworthy, that person becomes a “snake in the grass”. This story is about one of these amazing creatures, on and off More Mesa. At the end of the story you can discover why “snake” is a “bad word”.

Gopher Snake is a Pretty Big Snake … but Harmless

There are five different species of Gopher Snakes in California. In Santa Barbara we are at the northern edge of the range of the San Diego Gopher Snake. Even more interesting is that three of our Channel Islands are the only location for the Santa Cruz Gopher Snake … an endemic species found only on these islands. This Treasure Hunt will be devoted to the most abundant and conspicuous member of local snake fauna and the one most often found on More Mesa, the large San Diego Gopher Snake.

Recent anecdotal evidence indicates that Gopher Snakes seem to be in abundance on More Mesa this year. And they can be intimidating if you run across one, because Gopher Snake adult sizes range from 3 to 8 feet. Within their grassland habitats, these animals live a solitary existence in underground burrows, both during hibernation (October through March), and for a large fraction of the time when they are our and about as well.

Peak activity for adults (3 years and older) is early May and June. During this period, they reproduce by laying 10-20 eggs in loose soil or unused burrows. Decaying vegetation and warm soils will then incubate the eggs for about 80 days. During the period when they are eating,
Gopher Snakes prey on small mammals (rodents primarily, and aptly enough, gophers) as well as bird’s eggs. Therefore, as a species, they are extremely important in keeping the rodent populations in check and maintaining local ecosystems. These large snakes are not venomous, but “constrictors”. That is, they squeeze their prey by overwhelming the circulatory system and preventing blood from reaching the brain. The whole thing happens in seconds.

In keeping with their lifeway, you will see Gopher Snakes in summer, when they rest in the sun on More Mesa’s trails. In other areas they lie out on roads and are often run over by vehicles. Unhappily there are also many instances where 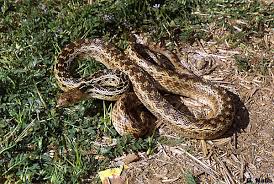 hikers deliberately kill Gopher Snakes because they are mistaken for Rattlesnakes. (As far as I know there has never been a report of a Rattlesnake on More Mesa.) Both species have similar coloration, markings and large heads. In addition, they are both known to hiss loudly, vibrate their tails and flatten their heads when threatened … a set of defense mechanisms designed to ward off potential predators. In the case of the Gopher Snake, this display is a type of mimicry, where they, a harmless species, mimic a harmful species … a Rattlesnake. However, while mimicry may be helpful in keeping predators away, it can cause problems for Gopher Snakes. Humans decide to kill them thinking they are venomous Rattlers. Instead, those who come upon a snake should take a quick look. A few ways to tell the two species apart is that Gopher Snakes are much longer and slimmer. Further, even though they can make a repetitive sound with their tails, they don’t have rattles. If it is obvious that the snake, whether it is a Rattler or a Gopher Snake, feels threatened, the wisest and most humane course of action is to simply go away. Once it figures out that it is not being threatened, the snake will also just go away.

There is no need to exterminate Gopher Snakes. These animals, while they can be intimidating because of their size and may look a bit like Rattlesnakes, represent no threat. Gopher Snakes are nonvenomous. However, if you provoke it, a Gopher Snake may bite and the bite may hurt. As for the big picture regarding venomous snakes in the United States, recent statistics show that five to six thousand people a year are bitten by them. Five of those people die because they did not seek medical care.

Snakes shed their skin because they are just like all other animals. For mammals like us, this is an ongoing process, but for snakes it’s a bit more periodic, dramatic and noticeable, mainly because the skin comes off in one piece. If you look at the photo of the snake shed I found on More Mesa, you will see that it came off almost in one piece … inside out! 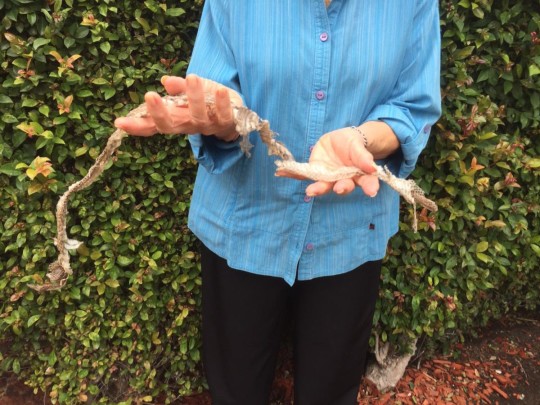 (This skin is in 2 pieces because I carried it in my jacket pocket to show More Mesa visitors and it received some rough treatment.) The shedding process is necessary to accommodate growth and to remove parasites on the old skin. Since the skin does not grow with the individual, as ours does, the snake has to do something entirely different. It starts by growing a new layer of skin under the old one. When the new layer is complete, the snake removes the old one. It’s just like taking off a sock. First it makes a small tear in the old skin, somewhere on the head area, by rubbing against something rough. Then it slithers out of the old skin and leaves it behind and it is usually inside out. Snakes shed their skin, on average, two to four times a year, varying with age and species. However, young snakes that are actively growing may shed every two weeks … compared to older snakes who may only shed twice a year.

Epilogue … Why Are We Afraid of Snakes? 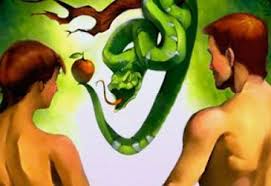 When I started researching this Treasure Hunt, I was intrigued by why it is that humans are afraid of snakes.  My first thought was to blame it on Adam and Eve. But it turns out, that it is in our nature to be afraid of snakes; that is, it is embedded in our DNA. Research over the past 10 years has given us some clues to the answer. In the beginning, early primates, and then humans, developed pattern recognition schemes for predators like lions, bears etc. But snakes don’t look like these kinds of predators … they look like sticks. Furthermore, they do not move like other predators … they slither. This would imply that the existing pattern recognition algorithms didn’t work. Then evolution took over, and humans who figured out they should fear snakes would have been at an advantage for both survival and reproduction. One clear indicator of this advantage was highlighted in a recent study. In that work, researchers found that both adults and children could detect images of snakes among a variety of non-threatening objects more quickly than they could pinpoint frogs, flowers or caterpillars. The implication is that we humans can identify snakes much more quickly than other things. This piece of our DNA is the reason that people who live in industrialized countries fear snakes … even when they have never ever seen one!

Instead of fearing them, watch snakes from afar (or near, if that is safe) and marvel at their coloration, how they move and, yes, how very beautiful many of them are. Then you also might be blessed enough to a carry a story like the one below in your memory banks.

Many years ago, at the end of a day on another glorious trip down the Colorado River, we reached camp and I jumped out to tie up the boat. “Over there” our guide suggested. He was pointing to one of the ubiquitous tamarisks. I hustled over and came to an abrupt stop about two feet away from the tie-up, completely stunned. I stared in disbelief at the biggest and most beautiful Rattlesnake I had ever seen! It was huge, pink, coiled around the tree, and had obviously been awakened by all our commotion. “Hurry up!” came the command from the boat. I announced the presence of our pink sleepyhead, retreated to “afar” and the guides took over. They dug out a “snake stick” from the hold of the boat, put the snake carefully in a sack and then released it into the water so it could find a quieter sleeping spot further down river. It was a day I will never forget!

If you see a snake, enjoy it, but behave as we must in our world today. That is … STAY SAFE!