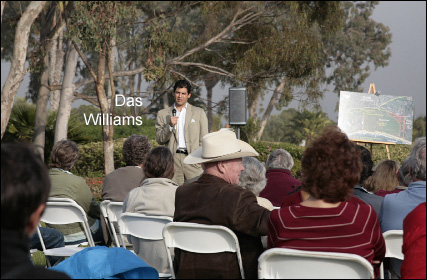 Many neighborhoods in the County and other areas along the coast are being redeveloped in homes far larger than existing neighborhoods. Development or redevelopment of parcels in the NE corner of More Mesa has begun to create a wall of large two story homes around More Mesa. Existing County policy only addresses this issue indirectly. How would you strengthen the County’s planning process and policies to prevent More Mesa from being surrounded by large obtrusive homes which obstruct public views and would forever change the character of More Mesa?

Das Williams: Current design standards are insufficient and too subjective. We need objective standards achieved by creating neighborhood consensus on what design guidelines should be used.

Janet Wolf: A floor to area ratio (total floor area {including garage}/ total area of the lot) of 45% has been used in many areas. The use of this guideline is commonplace and should be considered in our area

Joe Guzzardi: The use of floor to area (F/A) ratios in other areas has been a complete failure because community support was lacking. That is, homeowners and developers do not want house sizes to be constrained. We can only implement F/A ratios if we build community support and implement the ordinances.