Water, water everywhere
The word for this month is WATER!  Here in Santa Barbara, we are currently at 167% of our average rainfall for the “Water Year” 2011.  Indeed 9.62 inches of the 27 inches of rain has fallen in February and March.  What this means for More Mesa is that the vernal pool on the southeast corner has almost reached both the coastal trail, and the north-south trail on the side of More Mesa abutting Hope Ranch.

In addition the emergent wetland that stretches from Hope Ranch toward the middle of More Mesa, has formed a fairly deep “pond” across the main north-south trail.  A wide, marshy expanse surrounds this pond.  In search of ways to circumvent the wetland, several looping paths have been cut by both walkers and emergency vehicles out on More Mesa for various reasons.   In general, the middle of the path, and surrounding areas, are very wet and muddy.

In spite of the water and the mud, a walk on More Mesa is incredibly rewarding this time of year.  Wildflowers are to be found in several places along the trails and the grasses are green and high.  And, there is evidence that kites are already nesting! 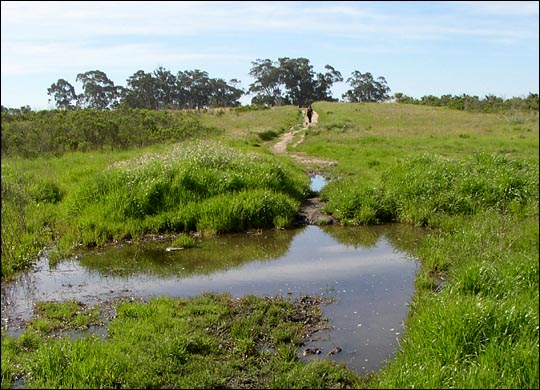 March 2011: A seasonal pool of water forms here in the rainy season. 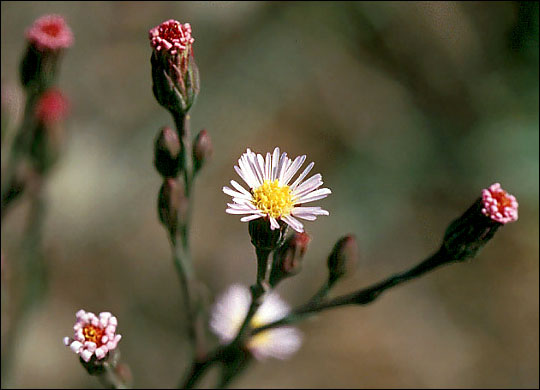 Annual Water-aster, Symphyotrichum subulatum, photographed in the area shown in the photo above in October 2002. This native plant grows in coastal salt marsh, valley grassland and wetland-riparian. It can probably be assumed that the soils in this area remain moist for a period of time after winter rainfall, providing one of the habitats of choice for this aster.