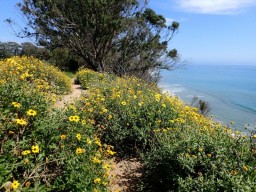 Flowers: The big rains that finally came, while turning the grasses green, have not produced many wildflowers. The problem could be that the rains came too late in the season. However, careful scrutiny will reveal some Blue-eyed Grass … here and there … and some extremely tall Owl Clover. The best show however, is the one along the coast … where the California Bush Flower is in spectacular profusion.

Vernal Pool: Another sign of Spring, our vernal pool, has water in it for the first time since 2011. Unfortunately, the 2017 pool is much smaller than it was in May 2011. Further, the hundreds of frogs that populate the pool in good rain years are nowhere to be found. To learn more about these special places that are fast disappearing from California, see the Vernal Pools feature on our web site. 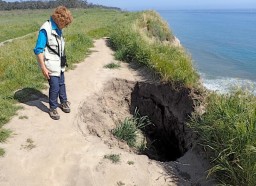 Heads Up!: With the rains come some potential hazards. Among these are sinkholes … like the one that appeared after the “big” February rain. It’s right on the edge of the coastal trail. In addition, visitors to More Mesa need to be mindful of the potential for trees toppling in the heavy winds that have been part of our weather pattern of late. Enjoy … but be careful.

The photo below, of a green and lush More Mesa, was captured by John Wiley. (To view more lovely images of our areas see the John and Ann Wiley blog.)

More Mesa has something for everyone …
especially a quiet afternoon for a good book …
and snacks.

Q: Identification of plants and critters that live on More Mesa is often difficult.

We see lots of interesting birds, plants and insects out there, but we usually forget what they looked like by the time we get home. As a result, we never know exactly what we saw! Any suggestions?

A: Use your smart phone.

Three guides, “Birds”, “Insects” and “Plants” area on our web site and were introduced at the bottom of page 2 in our April 2014 Web News. And, since our web site is mobile friendly, these guides are especially useful when citizen scientists and other visitors to More Mesa are in the field. So … when you are out enjoying lovely More Mesa and see something you want to identify immediately, you have the perfect option.

Grab your smart phone, bring up our web site and look for the appropriate Guide; Birds, Insects or Plants. It works “like a charm”!

Consult our website for more detailed information on how to enjoy More Mesa from a mobile device.

The Past … The rapacious nature of John More, the Monarch of More Mesa.

Although he owned one of the most profitable ranches in the Goleta Valley, John More was hungry for even more wealth. So he decided to lease Santa Rosa Island from his brother Alex, with a plan to raise sheep and sell the wool. Not happy with the lease situation, he then attempted to buy the island from his brother … to no avail. Apparently Alex was as greedy as his younger brother and held fast to the lease arrangement until his death in 1893. Since Alex left no will, John More promptly got himself appointed as “special administrator” of the $800,000 estate … $17.6 Million in today dollars! When a huge family feud erupted about who would inherit Alex’s property, John More took the opportunity afforded by his “administrator” position to transfer all the island’s livestock to the mainland as fast as he could. He then sold it as his own, reaping huge profits from many assets that really did not belong to him. John More was not only a character, but a scoundrel, if not an accomplished crook!

I hope you liked this slightly different format. Let us know what you think about it.