White-tailed Kites
We are delighted to report that the eastern kite nest has already fledged three chicks.  The appearance of the juveniles has been documented as early as the middle of April! This extremely early fledging of three chicks bodes very well for a large number of chicks being produced on More Mesa this year.  And, the parents appear to be extremely busy, not only feeding this brood, but building (and defending) a second nest as well!

We invite you to learn more about the kites of More Mesa, from two different sources on this web site. First, a kite feature, written by Lynn Watson, may be found at here.

And second, you may find additional information and a detailed history of kites on More Mesa on pages 29-33 of the recently published More Mesa Handbook.

Migrating Birds
Many migrating birds stop over at More Mesa both in spring and fall. This year, birders found a Yellow-breasted Chat, and one of the birders was able to capture a photo. These birds migrate to Mexico and Central America. 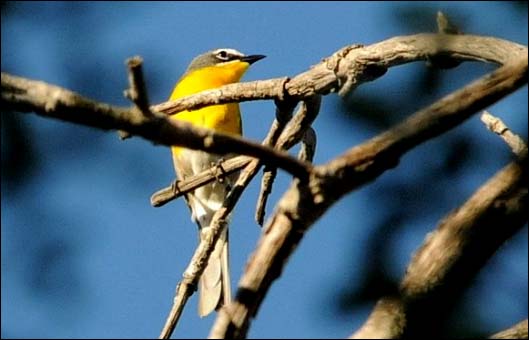 Yellow-breasted Chat on More Mesa, photo by Dianna Ricky, May 6, 2009.