A Tiny, but Powerful Member of the Animal Kingdom

Prologue: When I sat down to write this week’s Treasure Hunt I had planned to introduce one of my favorite and hard-working little plants, Deerweed. But as I got deeper into the research about certain aspects of Deerweed, I discovered a world of mind-boggling information on the major pollinator of Deerweed; Bees. Because of this, I added a section on bees that I thought was fascinating. As I have been doing, I passed the text off to a good friend and colleague to get his comments, edits etc. He, replied … nicely of course … “You got it all wrong, it should be all about the bees“.

When I thought about it, he was absolutely right! And here’s the reason … if you have been following our Treasure Hunts you will remember that 4 of the 5 of the “Hunts” published so far have discussed reproduction. After all … it is Spring, reproduction is in the air, and bees are a major player in this vital process. And happily, while bees are gathering nectar to raise their own young, they are simultaneously pollinating the plants they visit, thereby helping produce the next generation of that plant.

Scientists consider bees to be a keystone species and the USDA estimates that 80% of insect crop pollination is accomplished by bees. They are critically important to ecosystems of at least 90 commercially grown crops that depend on bee pollination for survival. Bees are the undisputed champions of the
pollination world. However, bees are in trouble.  Like many in the insect world, bee populations are declining precipitously. While pesticides and climate change, are part of the problem, die-offs are happening largely because bees, like many insects, are losing their habitat to both development and urbanization.

If a bee were a superhero, its sight would be its super power. Bees have two types of eyes, with each type having a separate function. The three smaller eyes in the center-top of a bee’s head are called ocelli; a word from Latin, and meaning “little eye”. These little bee eyes each have a single lens, with the three of them helping the bee maintain stability and navigate. 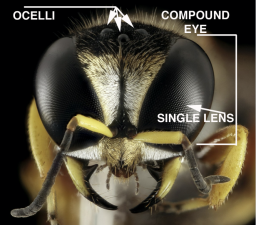 Vision is accomplished using two very large compound eyes. These eyes are amazing examples of nature’s engineering. A bee compound eye is made up of thousands of tiny lenses called facets. Each of these facets takes in one small part of the insect’s field of view. The bee’s brain then converts these signals into a mosaic-like picture made of each image. Some bees have up to 8,600 facets.

Bees go mad over the bright-yellow flowers of this California native. And, as mentioned above, they are simultaneously gathering nectar and pollinating. However, once pollinated, the flower gets to work producing seeds for the next generation. Since the bees are no longer needed on the pollinated flower, that flower turns red and a bee can’t “see” it anymore. It is therefore common for us to see both red and yellow flowers on the same stalk of Deerweed. Why does the plant do that? The pollinated flower appears black to the bee, so it is not attracted to it, because it can no longer see it. Bee vision then becomes another “Mother Nature win-win” situation; the bee doesn’t waste time on the pollinated flower and that particular flower is not disturbed while it is busy preparing for the next generation.

You can find Deerweed along the coastal trail of More Mesa and many other habitats in our area. You can find bees everywhere.

A Word in Support of the Bee

Lastly, have you ever noticed when someone mentions bees, the first thing, and most times the only thing, that gets discussed is a stinging incident? Unlike mosquitos and other stinging insects, bees are merely reacting to a perceived threat to the colony or the hive. There is no benefit to the individual bee who stings someone. In fact, it is committing suicide, since the stinger is stuck in the wound (with several other body parts) and the bee can no longer function.

People who love More Mesa have a long tradition of not only carrying out their own trash, but picking up trash left by others. Since the lockdown many more people are visiting More Mesa. These new people don’t know about our More Mesa traditions and therefore do not know that they should be very respectful of this place we love. Also, with the current situation, it is not as easy to pick up after those who are “not in the know”. One way to help would be to educate the newcomers … shouting from six feet away … that More Mesa is a very special place and we need to take care of it. Ask them to PLEASE pick up their trash and carry it out.