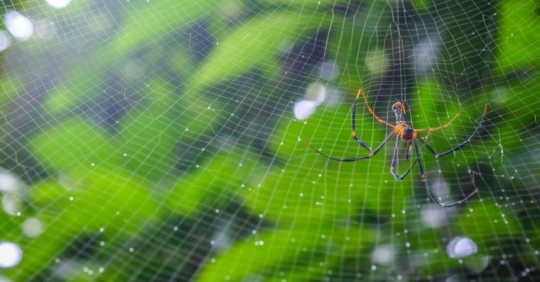 IN KEEPING WITH HALLOWEEN … HOW ABOUT SPIDERS?

The next two Treasure Hunts will be about a creature which is found all over More Mesa and also epitomizes the month of October; the spider! Spiders are not insects. They are in an entirely different Class; the Arachnids. This Class owes its name to a famous story from Greek mythology, that goes like this. It seems that an upstart Greek maiden named Arachne thought she was such a superb weaver that she challenged the goddess Athena to a weaving contest. This was a little presumptuous as, among several other things, Athena was known as a goddess of the arts. Athena however, accepted the challenge. When both weavers were done, Arachne’s weaving was so beautiful that Athena had to grudgingly admit defeat. 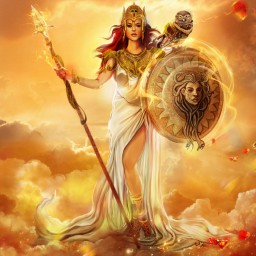 However, given that she was also the goddess of warfare, she worked herself into a rage and destroyed Arachne’s work. Arachne, being a really sensitive artist was so upset that she hung herself. At this development the goddess calmed down at little, took pity on the weaver and loosened the rope. Then she turned the rope into a web and the maiden into a spider. Thus, we have the class Arachnida and the very first indication of the powerful role of females in the spider world. 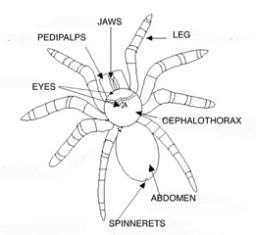 What is it Anyway? … Ask any kindergartener and they will tell you that spiders have eight legs, eight eyes, two body parts and are “way cool.” In the diagram you will see that the first body part, the cephalothorax, is where the eyes are located, legs are attached and most of the muscular structure is contained. The cephalothorax is actually the head and the thorax, but with a solid connection instead of a flexible neck; i.e. the head cannot rotate. The second body part, the abdomen, holds the digestive and reproductive organs and is usually the largest part of the spider. (It also holds the silk producing elements, the “spinnerets”, that you will read about in Part II.)

Legs – The eight legs of the spider are usually long and hairy. Hairs are used to pick up scents, sounds, vibrations and to detect air currents. Males usually have longer legs to keep the female at “arms length” during courtship. (More on this in Part II.)

Palps – There are a pair of palps on the front of the first body part. These are part of the complex mouth and seem to be used mainly as sense organs, perhaps for taste and odor. In male spiders the ends of the palps are modified into complex structures used during mating. (Believe me, it’s complicated!) 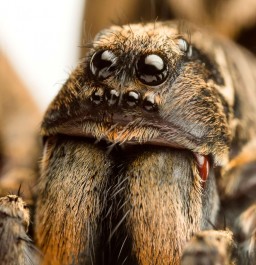 Mouth Parts – Spiders are carnivores. To facilitate hunting these hollow claw-like appendages contain venom glands that allow the spider to inject poison into the prey thereby killing it and allowing the spider plenty of time to wrap it up for a later meal. 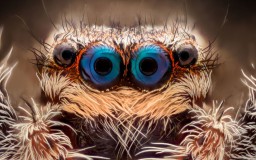 Eyes – Spiders usually have eight eyes, but few have good eyesight. They rely instead on touch, vibration and taste stimuli to navigate and find food. (Only a few spiders, like the wolf spider, need good vision.) Of the eight eyes, the job of the two very large front eyes is to get a clear, color image and judge distance. And while they are large, these are simple, single lens eyes that are NOTHING like either human or insect compound eyes. The small side eyes, called ocelli, needed because the spider cannot move its head, detect when something is moving. You need a lot of them to get a 360 degree view in order to spot your dinner or an unwanted diner! 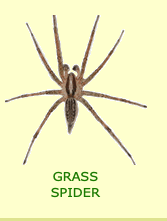 Molt – What the kindergartener won’t tell you is that the spider has an exoskeleton; a hard covering that is like a suit of armor to protect body parts and organs. The exoskeleton cannot grow, which means that the spider, like insects, must periodically crawl out of the whole outside of its body in order to grow larger. Needless to say, this is a complex process and one in which the spider is very vulnerable, wisely choosing to “hide out” until the molt is over.

Spiderlings will molt as often as once a month and adults about once a year. Bigger spiders have more molts than smaller ones, with the molt requiring from 15 minutes to 15 hours to fully harden, depending on the size of the spider. And while all the early molts are about growing into a larger body, the very last molt is one which also includes a “one-time only” interest in reproduction … and decidedly different from reproductive activities of mammals. (See Part II.)

Size – In most of the 45,000 species of spiders that we currently know are on earth, females are larger than males and sometimes incredibly larger than the males. Most of the largest spiders are from the Tarantula family. The largest spider known on earth is the Goliath Birdeater (12 inches) from South America and the smallest is the Patu Digua (male 1/5 the size of head of a pin) from Columbia.

Lifetimes – Most spiders live about a year, except really big ones. For example, some female Tarantulas live up to 40 years, while their male counterparts are only around 4 years or less. How do we know this … because some people keep them for pets. (Figure that!) Although giant spiders do not tend to be aggressive, they will (like smaller spiders) bite to defend themselves or their egg sacs.

Enemies – Spiders have lots of enemies. They include birds, fish, lizards, Tarantula Hawks (these are actually wasps), spider wasps, centipedes, scorpions, other spiders and even, in the tropics, monkeys. But one of their worst enemies is the human race; and we don’t even eat them.  We use pesticides to destroy them (as well as all their food sources), we stomp them, drown them and some of us even vacuum them up. (Be sure to read Part II of Spiders to learn more about all our misconceptions about spiders.) 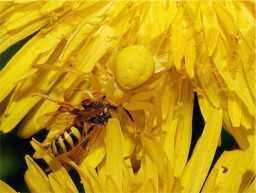 Defense – The principal way that spiders try to escape their predators is to avoid being seen. Some of them live in burrows where a predator would have to do some major digging to find them. These underground dwellers also make sure they have well camouflaged doors. Spider mimics try to look like the background of where they live and still others mimic a dead leaf, a twig, a stem or even bird droppings! In the image on the right a crab spider has turned yellow and captured an unsuspecting bee for dinner. Only recently scientists have officially documented the camouflaging  capabilities of a crab spider. It is one of the few spider species that can reversibly change the color of their bodies to match the colors of the flowers where they hang out and stalk prey. Although it can take up to 25 days to change color, once changed they can largely remain unseen. What colors are on their pallet … white, yellow and green. See how this works for a clever crab spider. In the final analysis, a spider’s worst enemy is weather; in the form of drought, flooding or a long cold winter. Since these kinds of things happen to all the organisms in the population, things eventually sort out. 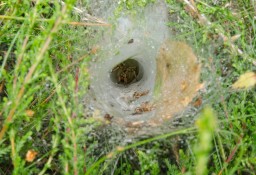 Types of Spiders – There are many types of spiders living on More Mesa and in your house or garden.  Among these are the famous Orb Weavers that charm and delight us. (We will talk a lot about these in Part II.)  There are also Wolf Spiders, who are one of the few species with good eyesight. They have to catch prey by running it down. Their lives are hard, strenuous and dangerous; and actually, more like that of a cheetah than a wolf. Finally, on a foggy morning in More Mesa you may be able to see dozens of funnel that are the home of Funnel Spiders in the grasses.  Look for the hole in the funnel, she’s waiting for some unwary insect to drop in for lunch!
Let’s go back to that kindergartner again. Most adults would not agree with the kindergartner’s assessment of the spider as “cool”. They may shudder and use words like “heebie-jeebies.” However, spiders have intrigued humans since ancient times, and were often seen as mystical because of their ability to weave intricate webs. Much like the bat, cat, and the owl, spiders (as Halloween symbols and otherwise) are creatures considered to be endowed with supernatural qualities. And, like other creatures of the night, they were associated with witchcraft. More clinically oriented people will cite spider bites as a problem, but the reality is that spiders rarely bite and only a few species are dangerously poisonous, viz. the Black Widow and the Brown Recluse in the US. (Only one death has been reported in the last 20 years.) On the flip side, spiders are an incredibly powerful aid to the entire human race. It is the large numbers of insects, many of them pests, that are trapped by spiders, that make them invaluable to us and to the balance of nature. In fact, Spiders catch and eat more insects than all of the other insectivorous animals put together. They deserve our hearty applause!

It is hoped that when you finish reading all the different, yet strangely similar activities of spiders, you will be fascinated by the various ways they “make a living”. During the research for this Treasure Hunt I was both intrigued and amazed at these tiny creatures … and realized that they are not so spooky after all. While reading Part II (coming up soon), the women among our readers may recognize, as I did, some startling similarities between the lives of female spiders and all the things we do. Stay tuned for the rest of the tale of the spiders … and most of all …STAY SAFE … Valerie